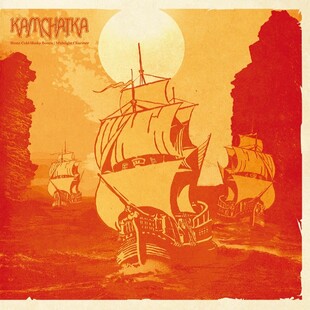 A return for one of those bands that seem to have loitered around the stoner rock scene forever (we first reviewed them back in 2006), Kamchatka have apparently been lying low but return via a two track 7” out on H42 Records, striking artwork attracting you in.

Side A, Stone Cold Blues is laid back, residing between the heavy 70s rock of Cream and the faded proto-doom turned-AOR of modern Graveyard, it rides with a self assured cool, the benefactor of an experienced band despite the three year hiatus. That sense of ease rescues it from inconsequence.

The B side is not so fortunate. Midnight Charmer is classic rock to bait the dads, it has some brief nice touches - a bit of a strut in the lead out - but I’m reaching to find positives. It lacks for edge; no grit, no weight, no psych swirl, feeling all too safe. It doesn’t have to be this way, see the danger of Kadavar, or the exploration of Samsara Blues Experiment, both operating in nearby pastures.

Nice to catch up with a familiar and friendly face, but a passing nice moment on one three minute track aside, it's an unfortunately forgettable rendezvous.