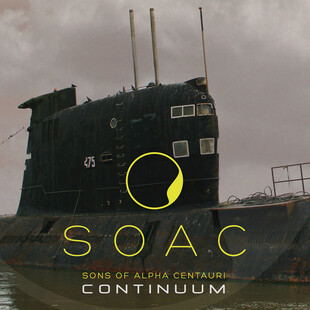 Sons of Alpha Centauri appear to be a band residing in the shadows, only traipsing into the light infrequently to record with some of the stoner godfathers of the US (Yawning Man, Karma to Burn), or even rarer, to release a new album of their own. It therefore feels a little bit more exciting than usual with other bands to have their latest here and about to be revealed to the world, more than a decade since their first and last full length.

This is certainly grand in its ambition. Whilst wholly instrumental, the song titles give hint to an overall story flowing through the album, of a voyage around the outreaches of our solar system. You sense it has truly fed the music too, an attempt to portray this narration via the instrumentation, through their slant on stoner rock, space rock and post rock expansion. (How it all links thematically to the submarine of the cover art is something I can't fathom, something I must be missing.)

I'm left in two minds though, and still can't settle between both trains of thought. The negative is that it lacks for great songs, drifting by way too much, often feeling like its traversed too far into backing soundtrack than musical accompaniment. The post-rock led passages (or Pelican-like post-metal), of which there are several, dilute momentum too often, uninteresting and unthreatening in their own right and allowed to explore for too long without any resulting discovery. These are strong concerns, not mere niggles.

Yet the other side makes a case as well; the positive lying with the fact you can't help but admire the album's outlook and reach for the cosmos. Each half of the album is prefaced with a track of less than two minutes that builds atmosphere; Into the Abyss's Blade Runner synth futurism aligned with a simple haunting guitar that is more spaghetti western (aggregated towards Westworld territory perhaps); Surfacing for Air with its unnerving Twin Peaks incidental feel; both setting the theatrical vision impressively. Orbiting Jupiter is a sole grand piano, and the echoes from it, something unique for albums that cross my path at least.

The electronics - the keyboards and effects - are consistently a highlight, illuminating yet mysterious without fail, giving the Sons an extra element to stand out from their peers, and covering somewhat for an potential perceived deficiency from the lack of vocals. And there are a couple of good tracks worthy of individual note (Solar System, Return Voyage) although quite possibly they're also just the two with the weightiest passages and therefore merely appealing to my taste.

An intelligent, thought out and interesting record, Continuum acts extremely well as a cinematic aural adventure, which you feel compelled to applaud. However, purely as a rock album, and a collection of rock songs, it comes up short too often. Those with the will for grander visions in their musical experiences, and possibly more patience than I, will perhaps not see those as two separate functions and celebrate the whole as one, with the distinction or lack of it purely dependant on each listener who ventures in.