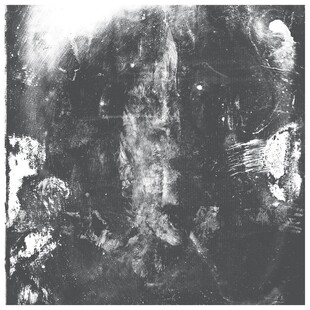 Rotting Sky is the solo project of T. Messing, also of the revered Nux Vomica. Originally released in 2014 on only 100 cassettes, it now gets a remastered rerelease, Sentient Ruin and others recognising that this specially crafted blackened noise is deserving of wider acclaim.

It is soon apparent on first track Smile that this is the murkiest of noise, flickering through monochrome shades as new elements appear, some near, most far, black metal shrieks, a single piano key played somewhere in the distance, the ever present static bending to each new phase, it is oddly enchanting despite the nightmare world it envelops you within.

A rather old school black metal greets you at the beginning of White Angels, the atmosphere again tortured by the buzzing, rattling noise, an agitation at odds with the oddly calm synth passages underlayed. As it progresses through its eleven minutes - as you learn to live with the album in fact, the front and centre veneer becomes less obvious, to the point where you are worryingly at one with the release. You start to hear more, the different layers - there's an obvious industrial element, but also a folk-ish drone strata as well. The last four minutes play out to squealing feedback.

There's a grand atmosheric black metal sound here on Tyrants of Sedation, sounding otherworldly. A tad Oranssi Pazuzu off-kilter, it threatens from the shadows, yet screams to the stars. It has a soundtrack quality, a Blade Runner mix of failed humanity, dirt and aspiration, ending upwardly toward brightness. Ivory is the come down, a lone drum beats through, a patient and humble pace never errs, hushed vocals usher through to the album's end.

An uncomfortable drone and noise release, with a definite black metal bias, it is certainly harrowing, but ultimately rewarding. I can't imagine dipping in and out - it is an album to experience as a whole, as you need to acclimatise for a few minutes each time, but certainly worth the investment.