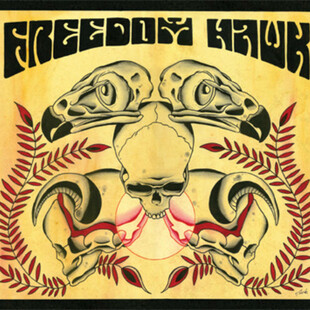 Freedom Hawk are one of the leading beacons to the straggling remnants of devotees of stoner rock in the vain it was played in the late nineties. They deliver it now unchanged, as if it still glows strong, as if it requires no new innovation. That's fine, but many of us have moved on. It feels strange then to find this re-release by Ripple Music of their debut album, from 2009, back then put out through the heroic stoner mainstay MeteorCity, presumably one of their last outputs.

So, this came out eight years ago, at which time it was arguably already at least ten years late (never mind the additional 30 years the whole scene harks back to anyway). So why bother re-releasing this? Well, because it's pretty fucking good - pure, unashamed, stereotypical stoner rock for sure, but with some great tunes that not only make that not a concern, but actually make you pine for times past.

The good times roll from the start, reminders of Dozer or The Atomic Bitchhwax - the latter in particular heard throughout, On the Other Side bringing forward those welcome comparisons straight away. Universal is better, sHeavy come to mind in amongst the Sabbath-isms. My Road has the feel of restrained Truckfighters, one of the elite few who managed to produce fresh and exciting straight up stoner rock post-early-noughties.

There follows a couple of tracks that are by no stretch bad, but don't stand out, and therefore suffer the possibility of getting lost amongst literally thousands of likeminded stoner from a decade both pre and post this album's original release. The swagger of Jay Walker is energising, ensuring it doesn't suffer the same fate. The final track changes pace to and fro, to attempt something new, but it does little else, and the Ozzy-aping vocals drag it back into clichéd realms.

I'm familiar, albeit passingly, with Freedom Hawk's albums since this, but I've never heard the self titled album before, and it stands out immediately unlike anything that followed. Which justifies the re-release I guess. It won't turn any new heads, it may already be known to their fans, but there'll be the odd stoner rock fan long since flown along rock and metal's constant evolution, like myself, that'll gladly lose themselves to a good slice of this, nodding their head along and thinking well of their home-genre past once again.