ADCX The Day I Heard the Moon Roar 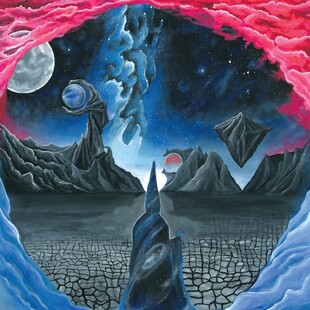 The first four tracks of The Day I Heard the Moon Roar tell you everything about ADCX, from London and Southend on Sea. Taking the songs in isolation you'll not notice, but as a whole it is bewildering. The opener, The Parlour Scene conflates airy almost post-rock with big crashing doom interruptions, vaguely reminiscent of recent Torpor output. Then arrives Comet Shoemaker to really turn the tables askew with its 80's electro soundtrack SURVIVE thing going on. Ripples in the Fabric is a minute long filler, but one of oppressive noise, then The Passage (Part 1) begins with ripping black metal, before plateauing into a more atmospheric end. Four tracks, each with wildly different identities, this is undeniably eclectic.

So far, so strange, yet truly enthralling. It is never muddled, merely allowing for giant leaps as one track ends and another starts that throw you as the listener, but not the band.

From there, the album actually gets better, whether that's purely as you begin to settle and accept the bold screeching turns, or quite possibly just because the individual tracks really shine in the middle of the album, I can't say. Project 242 in particular is fantastic, astronomical samples giving way to the heavier end of space rock, not unalike Vinnum Sabbathi's heavy-fuzz heads-down blow outs. It is excellent. Beast With a Million Eyes flows through harsh moments where deeply buried shrieks can just about be detected, to gentle as you go dream whimsy, which then cosies up to a thundering doom, ending in synth eerieness.

To top off the album's expanse, there's the mix of electronica and heavy, simple sludge riffs of For the Ghosts that does well to merge those contrasts. Only the shoegaze melancholia of Outside the Basilica, replete with delicate guitar over electronic beats, falls flat, but then that's largely as it resides outside of my personal musical taste.

At first there is bafflement, with admiration for ADCX's bravery in the wild direction changes. Then as the album goes on, this transforms into a real affection, some amazing tracks providing more than just a weird see what's next thrill. Playing the album back through, it then all begins to make sense, an architecture that is impossible to truly view when first experienced, but one that reveals itself with the benefit of looking upon it all as a cosmically-influenced whole. Your mind opens to the artistry, and the patterns align, like the constellations in the sky.