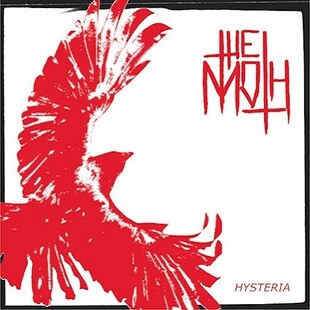 The Moth are an intriguing proposition, touted as purveyors of an enlightened vision of traditional doom structures. They're touring the UK soon (originally due on the road with Witchsorrow until the Brit trio had to pull out), and Hysteria, their new album, is out early November.

Early impressions are formed by clear reminders of High on Fire, both in the thunderous momentum in guitar and through the vocals. It is a thought too often recalled across the ten tracks to be completely comfortable, too reliant on that source, but there is variance offered via other means.

It is through a contrasting constraint that The Moth separate themselves from the obvious paths. The title track for example, flickering with static that pervades the doom riffs, never kicks on or in, unwilling to launch forth to war. Instead they hold everything back from any eruption. The problem is that the mood demands it, and opportunity feels lost.

That frustration is replicated elsewhere. This may be classed as "progressive doom", but if all that means is a reduced commitment then there's something wrong with our labelling. When the pace slows, as on This Life, and the male/female vocals echo each other, they rise to prominence as the breaks are applied, but the dynamic doesn't change and there's little electricity.

Too much of the album is lost to the separation between HoF doom roll and the enforced restraint without it truly hinging together. This can be done well, but here misses too often. Yet there are moments where it works - Brachial bringing the same formula, but applied cannily, illuminating in its clashes between expectation and delivery, even before an unexpected uptempo yet fun near-death metal middle section. It is excellent, proof of a grand plan that works, that can raise The Moth to levels above. The other big reference point would be Black Cobra, and later on Shattered and in particular Fail benefit from that comparison. That it is easy to pick these highs out is unfortunately telling.

There are bands that do this really well, the dispassionate vocals allied to doom - Solar Halos for example - but this on the whole just disconnects. It is frustrating, as they are near making this click, but where it so nearly could come across alluringly reflective it just sounds distant. Worth keeping an eye on, for this most definitely will translate better live, and for the laudable fact that The Moth don't follow the doom rule book.