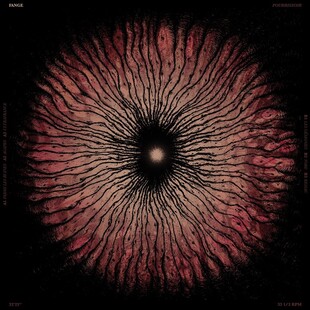 A few short years ago, somehow, I was oblivious to the French extreme metal underground; now, it's the first place I'd look for my next mainstay fix of black metal or blackened hardcore. I spent the weekend evenings just gone scrolling through a multitude of French grindcore too. You can add in sludge to my fond gazes across the Channel - Cowards to an extent, but Fange primarily causing a stir with their past releases, happily returning speedily after last September's Purge album.

Straight up, Parmi Les Ruines is instantly dirty, hardcore paced sludge. What appears to be a self destructive, inwardly spiralling descent into oblivion, then screams outwards in wild, flailing attack as best form as defence. It develops, stretches, dims then brightens, generally pulling you around to its close. It's superb. Agapes delivers this sense further, punk throttle driving an ugly sludge splurge. An all encompassing noise surrounds the bulging riffs in the midsection, eventually bursting to a full pace thrash out to the near end. Pourrissoir is already energy-sapping in its relentlessness.

And then it breaks, two tracks of harsh noise, disrupting the flow, piling on the discomfort, bookcasing the nine minutes of Les Gémonies, a depraved dragging through the dirt of doom's ugliest dramas; slowed down, downer inducive. Feet are applied back to the pedals, and fingertips shredded against string for the closing Ressac, practically grind in intensity and death in growling ferocity.

I'd quite happily have had an album full of the exhibition of hardcore sludge of the first two tracks. Yet that it is no let down. In just six tracks they have created a living, breathing, coughing and clawing piece of art that evolves and deforms as it progresses, one you could imagine as a soundtrack to the changing lifeforms taken by the alien being from The Thing. This is Fange at their prime, a creative manipulation of dark forces.