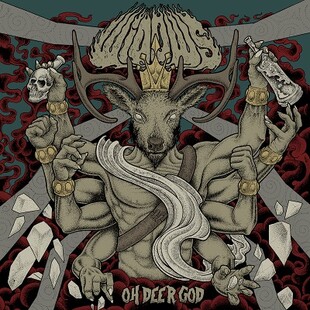 My previous opinions of Widows are set to be tested, with this their new album. I've always had them within a bracket of a handful of British bands that bother me, loosely stoner rock, with unashamed American accents, over-produced sub homages to the most unimaginative of influences, (Clutch, Kyuss, Down) that do no honour to any, not adding individuality or advancement. Yet, for some reason, I've never disliked Widows like I do their peers - the one out of the lot who seem to at least make things a little interesting, and create good, listenable tracks.

Oh Deer God follows as my preconceptions prophesised, but magnified triple fold, in light of this bold, fearless release, where they commendably hold nothing back. Take Blue Tina, reminiscent of southern states stoner, a touch heavier than the median I guess, with reminders of Alabama Thunderpussy, as an example. It's all good, but with strong caveats of having heard it before, from lands afar. Or the opening title track, which is cringeworthy to start with, turns exactly into Clutch's seminal self-titled album half way through - I mean exactly - then leads out from there with impressive heavier edged riff, an appreciable head nod stomp through to the close.

Heresy and Venom is more Red Fang meets Raging Speedhorn than an 80's crust and black metal crossover the album title could suggest, and ain't bad. Caffeine and Hatred is my favourite, the heaviest and most direct, a pissed off and fast minute-long shuffle through High on Fire and even Entombed territories. The last three tracks fall into some of the lazier tropes, only a big rolly riff in the midsection of Baron Greenback Blues standing out from the stoner/sludge congealment.

Anyone who has a fondness for the aforementioned current generation of British stoner rock scene, then this not only will be up your street, but surely should be recognised as the best that's come out of it. It is a strong album that sounds great, a case of bold production not smoothing too many edges. For me, nothing has changed I suppose, and for all its faults I have to admire Widows, and have to admit I do take positives away from Oh Deer God.