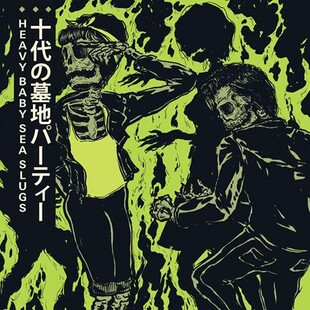 From the name and prattling self-written press blurb, I envisage Heavy Baby Sea Slugs as four eccentrics, happily finding each other in an otherwise misunderstood world. This is a frantic, all over the shop EP that takes a few listens to register and allow the derangement to settle down before you can truly assess.

The overall sound is a composition of The Melvins and The Misfits - punk blur tarnished by sludge rock beef. King Midas of Shit whizzes past in this sense, but there is a dishevelled itchiness unsettling the norm - kind of like how 30,000 Monkies ruffle the atmosphere just when you have them pegged. The title track is a weird joining of give no shit punk and slacker-indie sloppiness, that despite the Dead Kennedys rush they try to inject never exites anywhere close to a title like that should.

Pit Bait's start recalls Send More Paramedics' Zombie Crew - a comparison which could stretch further to the link with the EP's title, and Return of the Living Dead. A gruesome metal grunt vocal enters - this is a band not making themselves easy to love, but then I guess there's kudos to acknowledge there. It turns into Stoner Witch era Melvins in its ending, in one of the more structured moments. The six or more minute closing Zero One is noise and zombie moan, a band indulgence on a four track EP.

The "avant sludge punk" self descriptor from their press promo is almost proven truthful, but they tread a thin line between quirky attitude and plain annoying, largely teetering unsafely on the wrong side. The restlessness evident gives this a slapdash feel which never excels, but does hint towards a band willing to experiment, go their own way and piss off a few people on the way. And for that, and in case that ever allies to the right concoction of the ingredients they already have to hand, means they'll be fun to keep an eye on.