Thralldom Time Will Bend Into Horror 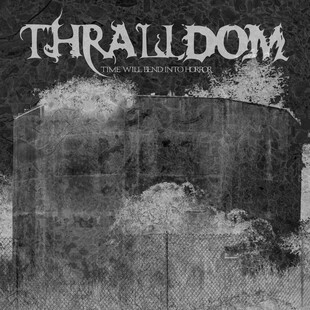 Ritual Productions have started to expand their net to bring similarly like minded twisted souls into their huddle, increasingly evolving into one of those labels you want to subscribe to and get hold of everything they put out, an earned assurance even without prior knowledge of the band.

Thralldom are their latest such release, returning to the fray for the first time in over a decade. This is music that reveals itself only on repeated listens, a grand scheme of nefarious arts that on first listen is little more than unsettling, but makes sense as you return. The sound is layered sparingly, initially negatively impacting on your ability to soak anything in, and on your attention, but as the album progresses this approach lends an eerie sense of isolation, part of the wider dynamic at play.

It is underpinned by the basic elements of black metal and doom, but is not restricted by genre, merely using these tools to create its own realm. There are moments of harsh wilderness, others of ethereal trance-like repetition, a menace palpably hanging in the air. There's an obvious whiff of Khanate, the doomier ends roughly those of Primitive Man, a surrealist air vaguely akin to Howls of Ebb, but ultimately this stands alone.

Bookended by atmospheric intro and outros, this is a walled in, inwardly spiralling narrative, a trip gone wrong. Time Will Bend Into Horror is an uncomfortable journey to follow, yet brings you back, as if gaining a guilty, voyeuristic pleasure of witnessing a break down.

Forums - Reviews and Articles - Thralldom - Time Will Bend Into Horror