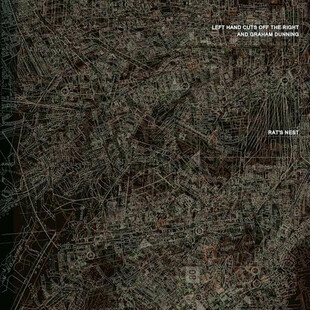 Sometimes the most inconspicuous noises can take on huge gravitas. The reversing beeps of a bin lorry, combining with the methodical swooshes of a street sweeper or an idling engine can almost be considered musical.

While not wishing to ham-fistedly explain musique concrete or appear whimsical and navel-gazing, that same idea can be applied to the collaboration contained within the Rat's Nest tape here.

Robbie Judkins has a prolific output as Left Hand Cuts Off The Right, and his often wild experimentation has been explored by us before, his split with TCH and Bad Suburban Nightmare being great examples.

But it's perhaps when he plays with others that his ear for the uncanny and syncopation truly shine, see his live experiment with the ultra-prolific Andrew Page (raxil4) , where he turns found tapes of speech into a haunting accompaniment to Page's drones and sinewaves.

Here, similarly, the two artists manage to weave an improvised, one-take piece that filters through beats, drones, processed sounds and repetitions that build and then ebb away like a giant collage. There's so much going on at points that it's almost a departure from Judkin's normally minimalist style. Graham Dunnings brings a structure that might have been lacking before, and it's a refreshing release.

A sound artist who takes unorthodox routes to producing sound, Dunning is a purveyor of what has been termed 'mechanical techno', but he appears to collaborate live on a regular basis with a very wide variety of artists. The rhythmic interactions here suggest he favours a 'beat' of sorts, but a shifting approach shows the duo's desire for chaos too.

This tape shows what can be done when two artists get together to jam their sounds together in an oddly appealing way. One to absorb in isolation perhaps, it's a truly sprawling exploration.