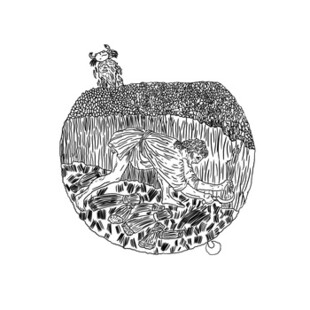 Armed Within Movement have again released a tape that shows off the UK's current drone talent without pushing it in our faces. This time the excellently-named Left Hand Cuts Off The Right clashes with the not so brilliantly monikered Bad Suburban Nightmare. The release is minimal in terms of artwork, the tape's packaging is starkly white with what looks like a woodcut of a troubled farmer reproduced in thin black lines on the front. The music however, is more busy than you'd credit. The sheen of spotless static that takes over from the start of opening track Ash serves as a canvas where what sounds like tools are clanking and de-tuned string isntruments are pawed at. The organic nature of some of the sounds contained within other tracks leads me to believe LHCOTR collects field recordings to scramble with other sources to create this. Guessing what these sounds are is part of the fun and the unpredictable nature of the sonic wash here is what makes it stand out. The seven-minute Habibi is a case in point, full of clattering metal jangling, it could be a wind chime collection, a tinker making his way noisily to market or simply dozens of tracks of single sounds moulded into a whole. This is overlaid by some uncertain, looped piano clunkings and all sorts of other dynamic sounds. It creates a small twister of noise that's fascinating, like rubbish caught in the wind, it could annoy as well as impress.

Bad Suburban Nightmare's side takes a somewhat more restrained tack. The work of a single guitarist, it delves into the lonely and hollowed-out pastoral charm that latter-day Earth embodies. All Ry Cooder-esque echo and delay, but somehow, even more elongated. Notes pass by as slow as train wagons across the American midwest, but with less bulk. You can almost hear the wind whistling on this side of the tape, it's an intimate and barely-there sound that's haunting and evocative. The quiet and calm it brings is welcome when compared to the relative maelstrom on the other side. Really rather good.