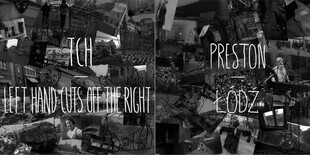 TCH, or Timothy C Holehouse as you'll know him has released a split 12" with Left Hand Cuts Off The Right to commemorate their tour together, starting in Preston and ending in Lodz, it's somewhat of a circular affair.

Starting with the TCH side (Tim has now renamed his darker, experimental alter-ego to avoid confusion) it's a long, exploratory piece from the man in the hat. a whistling loop of noise swings low over the majority of the track, while Grails-esque bursts of acoustuc guitar thrash away, building in intensity to cataclysmic levels.

Like the wayward cousin of the Secret Chiefs, TCH is best when left to explore infinitely like this. The layers created mean it's a rather intense listen, with several exhausting levels of acoustic guitar building throughout, it's got an Eastern scale style that you'll want to have ringing through your skull several times. I've replaced the needle back through this side a fair few times. No small portions from TCH it seems, just a waterfall cascade of sound. The crunches of static towards the end will cloy with some but it's an almighty and off-kilter ending you won't be expecting.

We've got similarly journeyman-like stuff on the LHCOTR side, deep cello notes and pastoral-sounding acoustics bump uglies with minimal percussion and soft electronic fluctuations and the five pieces prove both mournful and uplifting. Not easy to do with simply soundscape parameters, but Robbie Judkins manages it with aplomb.

Other tracks make use of melodica, it's rasp overarching a classy, picked bunch of notes and subtle percussion to create a haunting and Earth-like desert landscape. With ambient music it's all about the images it creates in your head. This is the slow panning shit across a hot desert landscape, heat making the distance shimmer and creating a rampant thirst that needs to be sated.

Elsewhere a twisted sample from a French release provides a maddening, drunken stomp towards insanity and has the ring of a world war recording blasting out across a ruined town, complete with vinyl scratches.

This is available on 12" and limited CDs I'm told, so investigate via the TCH site and the LHCOTR site.