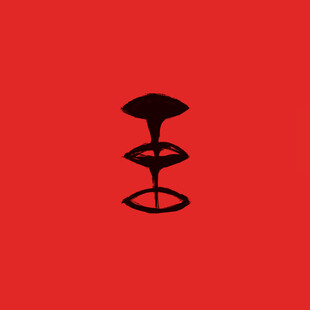 Their last album, Lowgazers, was an interrogation by torture, submission through intensity. Any thought that False Highs, True Lows might be nuanced in its approach due to colour being introduced into the album artwork are quickly quashed. The attack of the senses employed by Toulouse's Plebeian Grandstand is quickly resumed, impossibly and unbelieveably more so.

The black metal, previously merely a component part of their attilery is more prominent here, but only paints a smeared patch on to the overall quilt. I'd have to fully dare a return to their previous to be sure, but it feels like they've sacrificed some of their hardcore pace, but none of their pain. It feels a tad on the experimental side, in line with the fucked up world vision of Gnaw Their Tongues, aligned to bombarding kick drum overloads, and employ-all-arsenal at once worldview of Grey Widow.

I am struck back in bewilderment, incredulously in awe, at how this is so engulfing; witness Tributes and Oblivions or Oculi Lac's furious blackened pelt, or how Tame the Shapes develops depressively for seven minutes, only to degenerate for the last thirty seconds or so, serving as a bursting intro for the closing Eros Culture, itself an amalgamation of their fucked up belligerence.

They previously toyed around the edges of oblivion, daring you toward the fringes of extreme metal psychosis; now actually taking the blind leap into the unremitting darkness, miring the soul of their output in utter filth forever more. And False Highs, True Lows is the outcome, incredibly dragging you - willingly - into that abyss; incredibly, boldly and defiantly, better than ever, an album that you'll get lost within despite yourself.