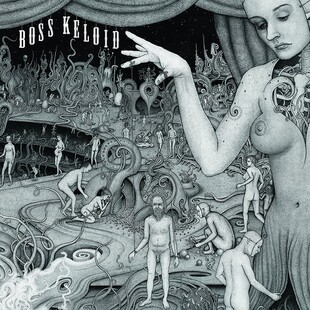 Preconceptions, I had a few. Having not heard Boss Keloid before but knowing of them, I wasn't sure what I was about to hear: half baked decade-too-late Iron Monkey worship? You can see why, but nope. Perhaps the dreg end of our national scene, where sub Pantera and Crowbar riffs played by knuckleheads, or stale bold stoner rock both pass as doom? Not sure why I thought they may be the case, but happily not either. In fact, Boss Keloid render a largely unique take on the modern standard, for which they really do gain my commendation. The problem is, it's not always for the best.

Take opener Lung Mountain, a slightly odd guitar accent opens, and reappears at intervals, welcome for its unusualness alone I suppose, and while my absolute first impressions beyond were of hackneyed metal, the track certainly grows on me. But the vocals grate, to the point I can't warm to anything else. They're too overreaching for my liking, part classic/traddish metal, part grunge. And yet there's still passages I truly enjoy here, the sledgehammer Conan-inspired latter riff, in particular, is excellent. The Disturbed-esque vocal histrionics right at the end though are unforgivable. When I'm thinking of nu-metal again, and the bad ends of it at that, on follower Haarlem Struggle (even if only fleetingly), then I'm backing away somewhat already.

But then comes Escapegoat, confident and truly impressive doom to throw my perceptions askew again. There are further strong points, Axis of Green has plenty of ingenuity swirling beneath, and the closing Hot Priest, while oddly bringing to mind Faith No More and Torpor simultaneously and unfathomably, is actually pretty good when I get my head round it. But too often between and throughout, it just doesn't settle, never consistently flowing. And ultimately, I keep getting stuck at the vocals, unable to see past, not at all to my musical tastes. And I use that word carefully, because it's not that I am offering an opinion that they're crap, far from it, just that if something doesn't sit right for you, and it's as central to the overall package, then it's going to severely impair your judgement of the whole.

Tonnes of invention, doom riffs, powerful vocals, varied late 90s influences mixing with modern stylings - I suspect (and I'm not saying this as a wuss-out sweeteener at the end of a less than glowing review, to enable me to pass this off as "constructive") there'll be a lot of love for this. And it will be deserved - individuality within such a confined and busy scene is a worthy accolade. It's just that, for me, there's a barrier to my enjoyment and even when I get past that, it doesn't always gel. True of all albums reviewed by anyone anywhere, but maybe more so here - go forth and listen. You may retract as I have, yet equally you may open your arms and welcome Boss Keloid into your life.