No Fate No Fate EP 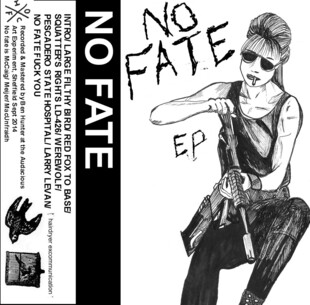 ..the entire human race are a bunch of fuckin dicks...

No Fate come out of what is becoming my fave era for bands in Sheffield. Along with clinical math stuff, psyche, stoner rock and sludge, there's some really fucking weird punk too. Along with Amorous Dialogues and The Repossessed, No Fate might be the best there's been for slightly tapped punk in a while.

The influences are all over the place, it's like a drawer full of teenage memories, torn up flyers and old video game cartridges packed in alongside cracked vhs tapes of Terminator 2: Judgement Day and Teen Wolf. There's samples from films here as well as some choice lyrics that are a little Half Man Half Biscuit gone 90s Epitaph via a gruff Sheffield accent.

It's little surprise to find my spirit animal Ste Coli is involved, it has his trademark stamp of outrage and humour in equal measure. It harks back all the way to Pudge and Stop That Astronaut, two Sheffield bands anyone after some proper snot should look for (but where?)

You'll definitely be able to catch this live at the moment every other week, I advise you do, it's music to drink cans to and party. Fuckin A.

Forums - Reviews and Articles - No Fate - No Fate EP