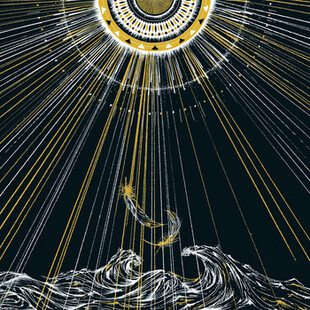 When Icarus falls are a band that take their name from Greek Mythology; that always works when band names are being thrown around. First impressions of their latest offering are that of unexpectancy.

Elizabeth Keubler Ross is a lady known for her studies in the five stages of dying, a somewhat matter-of-fact book has since been published on her work and creepily enough, we’ll all probably end up reading about it.

As it happens, the beauty of death has been portrayed perfectly in the atmospheric Pelican-infused; instrumental that accompanies the unique growl of front man Diego Mediano and opening track of Aegean.

Whilst track one uses stage one of Kubler Ross’ book, it’s would appear that basing an album of this type of music would work like a well-oiled machine; as far as pioneering is concerned. It has riffs aplenty to match the sheer denial that would go through our minds if we were told news of our own demises; that would be totally mind-blowing.

Track two sums up the second stage of dying too, down-tempo screaming that prickles the back of your neck perfectly making only one word come to mind, pure, un-initiated anger. Minor chords, battering the listeners brain like Ray Winstone with a sock full of pool-balls.

Stage three, is bargaining or Eumenides as the band have penned, slide guitar and post rock beats lead the way for the next onslaught, the vocals let the flood gates open like a tsunami of post metal. If Pelican’s back catalogue is nestled in your CD collection then this track is sure to please, providing you have 18 minutes to spare.

The next stage is depression, I guess some people have to go through this stage at least once in their lives, I’ve met some people who are no longer with us that didn’t succumb but this but then if you are plunged into a world of sheer misery then The Asphodel Meadows pt.1 is well-matched soundtrack.

Next up comes an Inner Journey, what we know thus far, judging by the style of writing, this is directly lifted from the Kubler-Ross’ book. The chiming of high-gain, dual riffing will never get old and in this case, when mixed with different time structures and atmospheric interludes, is probably set to be the future.

The last stage of the album is the one to accompany acceptance of one’s death, this is probably the single most terrifying thing to ever accept, what will come next? Well, When Icarus Falls have done a track that will accompany the acceptance side of things quite nicely, as the album was based on the book’s stages; it’s pretty hard not to listen to it with the same emotion that must run through everyone’s heart when that dreaded time comes, even if you are pre-warned.

In parts throughout this release, the vocals can grate slightly as they don’t have much range; this is slightly overshadowed by the ever-cool, mountainous riffs that plough through the atmospheric breaks. What would probably be a real blast would be to buy this, buy the book, burn one and read and allow When Icarus Falls to guide you through the whole thing, cover to cover.

After all, we all only get one chance at this life; you might as well enjoy yourself as you definitely won’t be getting out alive...