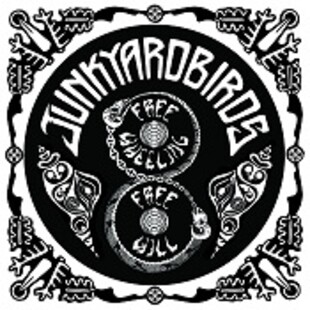 Junkyard Birds are a French stoner rock band who have apparently been around for 15 years, and claim a debt of influence to Fu Manchu.

The opening offering, High Heels and Leather Boots could be a titular Turbonegro style tip but musically brings to mind Lowrider, with a dash of punk rock n roll of a Hellacopters vibe, without ever being as exciting as that could potentially be. The following Lady FTW continues the Scandinavian mid-90s loose stoner rock feel, like Greenleaf for example, but without the classy groove.

It goes on, plodding along without doing anything of note, getting worse if anything, until Death Valley Rider which at least has something going for it - a catchy-ish Eighties Matchbox B-Line Disaster vocal style and rockabilly ethic. It's otherwise sadly lacking, continuing onwards in its part stoner part grunge part trash rock oblivion.

Even ignoring the largely annoying vocals, the sound is familiar and the musicality competent, but the sum total bland and devoid of songs that stand up and stand out.