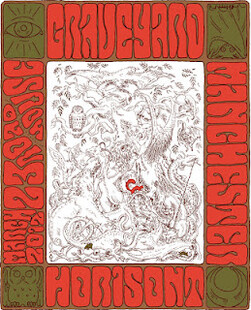 I first heard Graveyard at Roadburn 2008, playing at the Afterburner alongside Ramesses and Beehoover. I’m a big Witchcraft fan and was excited to see them, yet nothing clicked for me then and I didn’t investigate further when I returned. I’m certain now it was just end of festival fatigue, but I did think at the time they were simply Witchcraft-lite. Three, going on four years later, I’ve seen Hisingen Blues and self titled going for cheap, figured it was worth a few quid, and subsequently got hooked very quickly. Soon after that, while uploading live dates to ninehertz, I saw they were touring the UK, were playing Manchester on a Friday night on a day I had booked off from work already, and so booked my tickets and asked a friend to put me up for the night.

And so I’m back in Manchester heading to the Roadhouse, a frequent haunt of mine from my long gone student days. After an afternoon of drinks in the Crescent in Salford, and then a couple in Mother Macs – always our place to go back in the day when there’s a queue to get in the venue, as you can see its progress from the pub – we head in, and then down the familiar steps to the underground venue.

When we arrive, the support have already started. My lack of notice of this gig meant I didn’t know who was on the bill, but with a sound very suited to a Graveyard support slot greeting us, a quick glance at the merch stall tells me this is Horisont. I’ve started to hear quite a bit about them and as record label rosters go, Rise Above’s is one I feel I can trust, but then there has been debates on these very forums of a sound somewhere between Pentagram, Queen and the Darkness, and subsequently whether that is a terrible crime or not. My impression of them is very positive throughout, a slightly doomier less-camp Gentlemans Pistols, and I see the Pentagram link favourably. A high pitched vocal takes my thought to the Darkness comparison, but it is extremely brief. They play a UFO cover, which for me is unnecessary as it disrupts the distinct sound they’d created in the set but everyone else seemed to lap it up. That aside, I found them very entertaining, and promised myself to get their album soon (my money was low and I had to get a gig poster).

By the time they’ve finished, the Roadhouse is getting very full. I used to come here for random gigs, see whatever was on and often saw late-90s crossover Britrock bands here – Bullyrag, Sunna, Sona Fariq, Dust Junkies – and the occasional great gig – such as the Isis, Cult of Luna and 27 gig that blew the eardrums. It’s nice to return and reminisce, and it’s also encouraging to see gigs here and in venues across Manchester cropping up – with all the good tours of the next few months (eg Pelican, Melvins, Sunn 0))), Orange Goblin) coming here and them not all being monopolised by the University buildings.

Graveyard come on to a raucous reception from the now beered up crowd. They don’t disappoint – there’s a confidence to them live that translates into a musical swagger which elevates the songs above their recorded form. Even the lesser lights on the albums – and there are several as I find them infuriatingly inconsistent – sound great here, with not a weak track, nor a lull in my concentration across a long set. By the time they play Satan’s Finest, the Guinness has kicked in and I join in a large percentage of the crowd who are singing along. Ain’t Fit To Live Here, a truly glorious romp, doesn’t disappoint as my predictable highlight and the “oooooo” vocal bit (I can’t think how to explain that properly; if you know the song you’ll know what I mean) is sung gleefully around the room. They come back for an encore and receive a huge ovation from a very happy, surprisingly (Graveyard-)knowledgeable and passionate crowd.

Live, Graveyard benefit from their musicianship and swagger, leaving us all subject to a great night of seventies styled rock. The crowd spilled upwards and out into Piccadilly an elated bunch.