Circle Of Stones The Thrive E.p. 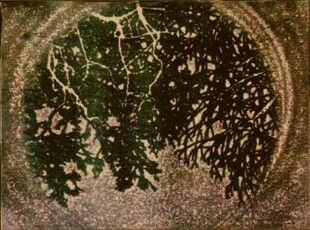 It appears I've gone and done it again and stuck myself smack bang in the middle of the same old 'Is doing something well that's been done plenty of times before better than doing something new badly?' argument with this one.

What I mean by the above is that this parting shot E.P. by Swansea's now defunct Circle Of Stones is Neur-Isis (as seems to be the term of favour at the moment) through and through. From the off in 'Blessed With A Boar's Tusk' the multi-layered textures, gruff vocals, that particular style of angular, doomy riff and the 'an atmospheric bit then a heavy bit' song writing are all in evidence. Let's face it, we've all been round this particular mountain before and more than once at that.

Fortunately, as far as I'm concerned (although no doubt some will disagree) the band handle this rather overly familiar genre with a definite level of flair and sheen, having paid close attention to the masters and using what they've heard as signposts in the right direction rather than an AA route planner set of exact directions. In other words, Circle Of Stones have at least written their own post-doom songs (and very decent ones at that) rather than just cutting and pasting various bits of other bands songs together (with the plausible exception of the title track which is undeniably too close to what's gone before for comfort) and there are moments where you get a glimpse of the band they could have become if Swansea's near total lack of faith in it's local produce hadn't slowly but surely killed them off (I'd have to point out that I'm just as guilty of this myself having never managed to see COS play live in the seven odd years they've been together).

After walking the road more travelled in the aforementioned 'The Thrive' however, the E.P. promptly (and not a little unexpectedly) ends on a stomping great High On Fire style riff-fest in 'Blood Of Aeons' that (after a short bit of the ubiquitous 'ambience' collapses into a nice, punchy Godflesh like ending and is quite possibly the stand out track as a result.

In conclusion then: a very solid set of slightly less than cutting edge songs, showing signs that they could have gone on to bigger and better things if only someone had been paying enough attention to give them a reason to bother.