Superterrestrial The Void That Exists 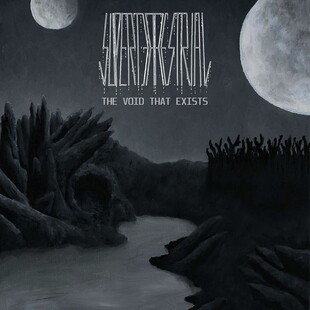 Synth in black metal gives me the fear, of symphonic overblown misplaced grandeur. But there is something about the blurb for Crawley's Superterrestrial that piques my hopes, despite reference to the aforementioned. It is pitched as "space-themed", therefore holding potential to be exciting; intrigue aroused and confirmed before it even begins.

And so it proves, on Cannibal Coronal Mass Ejections, immediately you sense something different and of the stars. The distant, distorted vocals add to the otherworldly feel. The guitars have a fairly standard black metal approach, but it is the layers of effects that sets this apart. And there is a real thrill to be had; by the time the chuggy riff enters I'm completely absorbed.

The following track Collapsar is opened by the piano, but then ups the tempo with sterling outcomes. Later on it dips once more into the synth void, before returning full blast, the ending all-out Anaal Nathrakh-esque ear-eviscerating war.

It continues in similar fashion album long, the black metal spikily ferocious yet also developed, in a Wiegedood, Wode or even Wolves in the Throne Room manner. The vocals consistently stand out despite being purposefully clouded, a harshness that prickles even above the core of full on metal instrumentation assault. There are openings, endings or mid-section soujourns into the keys-led astral voyage; elsewhere they're neatly incorporated into a combined sound.

The collapse of Heliacal Rising towards its completion into this state, for example, hints of a themed narrative the band have carefully crafted. The blisteringly good Moreton Wave is the final chapter, time given to really express this story further, with a grand Blade Runner style break midway through.

Forums - Reviews and Articles - Superterrestrial - The Void That Exists