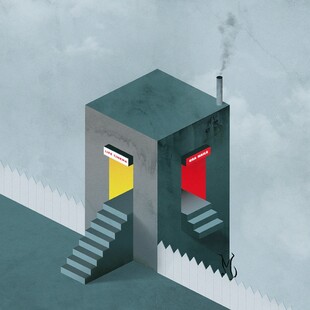 USA Nails play with the intensity and driving character of the best punk rock, the weird and off-kilter quality of the best post-punk and post-hardcore, and they do so amid a riot of dissonance and noise. The guitars clank and scrape, feeding back and playing dissonant chords and single notes held for just a bit too long. Sometimes the guitars work together and sometimes sound like each is trying to wrestle the other to the ground and knock the whole song off course. Meanwhile the bass and drums pound and thunder, like a massive storm no force on earth can stop. In the middle of all that chaos and energy the vocals are shouted or sometimes disturbingly muttered as if bored or resigned. The band sometimes call themselves punk, post-punk, and noise rock. All the terms fit and none feels exactly right alone because what the band is doing is more than any one of those terms.

The London-based four piece’s fourth full-length record, Life Cinema opens with about two seconds of what for another band would be a breakdown or a wild finale, the drums rolling and clattering and the guitars picked rapidly, then about two seconds of what could be an anthemic rock song. Those two figures repeat for about fifteen seconds of alternating tension and partial release, then the beat slows down. The verses lurch along swinging and staggering like a drunk stumbling along friendly for now but who might take get up in your face at any minute. The talk-singing punctuated by shouts adds to that sense of simmering danger. There’s a discordant almost-melody to it that is catchy but definitely not pretty, then building to an ending that shrieks a simple phrase like a police siren. The track’s called Smile and it’s disquieting in the way that being ordered to smile is.

The rest of the album continues being both confrontational but catchy in a fucked up way. Some of the songs speed up and put the band’s punk roots more front and center. Man Act for instance opens with a fast, simple, and frankly ugly riff that would fit well in the faster parts of a METZ set list, the drums and bass join in fast and the vocals are shout-sung in a relative monotone about the limited emotional pallet available to men. Other songs slow down just a little and present jarring near melodies that become catchy with repetition. Those songs sound like they could become rock anthems or pop songs but they always go somewhere unexpected and much harsher. A large part of It’s Ordinary, for instance, consists of two harsh dissonant chords rung out then cut off, with the drums thumping beneath it all like a frightened animal’s heartbeat. Through it all, the vocals almost sound like the singer’s mumbling to himself, mouthing repetitive phrases obsessively. It sounds a bit like you’re intruding on something. The tension builds over the course of the track and never really releases, it mostly just stops for a moment at the end, before the next unrelenting track kicks in.

USA Nails can play fast with the best of hardcore bands but the tracks that slow down are especially powerful on this record because they’re more unpredictable and unsettling. It’s like someone with a warped sense of beauty tried to make something genuinely pretty but landed on disturbing, like some outsider art. The lyrics have an outsider quality as well, conjuring up thoughts of dissociation, walking around just going through the motions. The final track, Life Cinema Reprise closes the album by turning the volume down and dissociation way, way up, emotionless muttering over music that sounds like the soundtrack to a video game from the 80s.

Life Cinema is clearly a record by a band who could easily write a hook-laden rock album if they wanted to, but instead they’ve opted for something much more confrontational and risky and compelling. It’s a weird sort of confrontational, starting the kinds of confrontations only weirdoes can have. It’s not at all macho, it’s more like someone who isn’t fully socialized and who crashes right through social conventions, like a stranger on public transit who aggressively refuse to interact with you yet also is very much up in your space - like they’re trying to keep you at arm’s length but also trying to walk straight through you like you’re not even there.

Life Cinema makes for powerful listening. I’m not sure if I would say this is the best noise rock record I’ve heard, but I can’t think of any noise rock records that are better. Listeners newer to the genre may find Life Cinema an acquired taste. Like a lot of things that are acquired tastes, it’s complex in a way that rewards repeated exposure. I’ve listened to it about ten times now and each time I hear something I hadn’t notice before. I recommend it highly. Go get it.

By the way, if you do get it, and you should if your taste in music is any good, be aware that the record has been put out by three different labels, Hex Records in the US, Dipped in Gold Recordings in the UK and Bigoût Records in France. Buy from the label that’s nearest to where you live and you’ll save yourself shipping costs and you’ll be supporting a label near you that is willing to put out creative music like this.