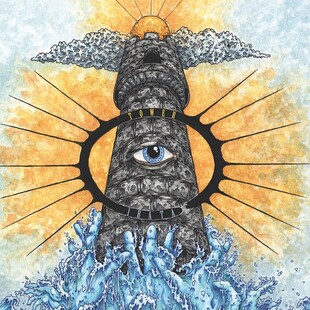 This is one of the best stoner albums I've heard in quite a while. Irata carry the sound progressively and create something at times magical.

The title track opener does a decent job of making you take notice, but greater profits are discovered further into the journey. There are echoes of Floor throughout Waking Eye that'll make you happy and that's before the engrossing ending, with its Tool gone mellow vibes vibrant. Weightless is equally engaging. It leads in familiar stoner territory, before quickly bringing in reminders of Torche, the beautiful marriage of weighty sounds and joyous sunrise moods.

Album long, Irata's uncliched and progressive approach to stoner rock is a joy to experience, placing them alongside the likes of Sweet Cobra, Estuary Blacks and Solar Halos in reveling and growing from and within the genre so often elsewhere stagnant.

Innocent Murmur is perhaps the only weak link, but only just - hazy delicateness that takes the dreamy from Siamese Dream a little too far. I can't really say I don't like it either, however lets reference the slow burning Constellations or the thrilling, gorgeous Leviathan instead for further evidence of this album's greatness.

For it is true - this is a fantastic record, one that is open, accessible and brings light, evolves and celebrates all that is good within the sound.