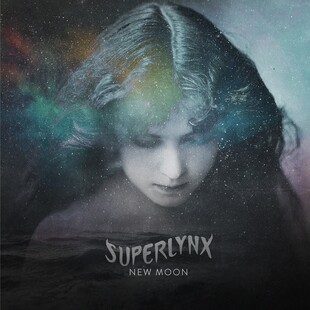 A well worn path winds through the opening minutes of New Moon, by Norwegians Superlynx, of female vocal led gothic tinged doom eerieness. Royal Thunder to Jex Thoth to Lotus Thief to Messa and many inbetween, we've been here before. It is familiar, but there's something in it to keep you hanging around a little longer.

It is more obvious what from the rewarding second track, Breath. It is in the guitar sound, a tinge of eastern European or perhaps Indian spiritual mysticism that is a defining characteristic of early impressions from the album, strongly favourable ones too that allow them to stand alone from the crowd. The vocals benefit also, typically airy yet seemingly more naturally at home within these hazy atmospheres.

Where the album returns to the standard proto-doom-lite, it suffers - treading water, greying into the background where so many - Alunah, Mammoth Weed - have done it before and better. There are a too few many of these tracks on the album, where the deviation that it elsewhere benefits from is absent.

That said, there is still an allocation of the more interesting moments to be found within. Indian Summer is sharper in the tone, an awakening from the gothy murk, and latter on takes a hint from the title and starts travelling toward a raga trip that is sadly cut short. There are a couple of tracks, most notably Cold Black Sea, which have a cool and freshening psych or stoner rock breeziness.

New Moon is a perfectly decent album throughout, the highlights damning the lesser fare by association. It is where Superlynx generate a true individuality they really shine.