Tides of Sulfur Paralysis of Reason 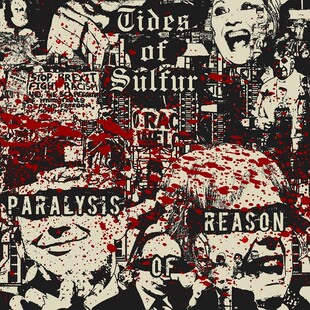 Fierce and looking for a fight, Tides of Sulfur couldn't sound more aggressively pissed off if they tried. Black Eye Riot, their predecessors in South Wales sludge rackets, would be proud.

This five track EP is unrelenting in its battery and misery. The opening Worms spews a gnarly tone and fucked off spite spat from the mic; it is a blasting, unwholesomely addictive two minutes of grind-end hardcore ferocity infected by a smorgasbord of extreme metal filth.

The longer tracks are sludge and doom as strangulated and desperate, somewhere between the horrors of Iron Monkey and the oppression of Primitive Man. My only complaint would be the early-teen childishness of Humourless Cunt, bookended as it is by a Guy Ritchie film sample and a swearing overload ending... even though I recognise I'm risking falling into the trap of the track title. It is a sludge beast inbetween.

Pariah is the second shorter track on the release, naturally increasing the velocity. Once again they nail it, like the sludge of our country in the early 00s, Charger, Monkey, Mistress and the like, grimy and grindy. The final track's manic beginning cedes to a slower middle, but with a caustic aura crackling in the blackened skies above, reminding me of Grey Widow.

This is a breathless, ugly and uncompromising release. It has riffs to rattle your ribcage, but there's more than straight up doom at play - it is constantly partnered with the wall of noise horridness that takes this to the next level, and requires a quiet moment or two to come round from.

Forums - Reviews and Articles - Tides of Sulfur - Paralysis of Reason