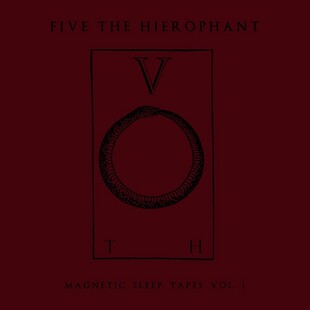 Five the Hierophant are an unlikely amalgamation of noises from London. They've melded doom and drone and jazz like few others over recent years, and their last album Over Phlegethon was an original and constantly interesting curiosity. They reappear on the thriving Astral Noize Records, with the first in a series of releases with an ambient and possibly even more out-there slant. There are three long, unnamed tracks.

1 - Haunting saxophone greets you at the gates of a portal to a dark and mysterious dimension. It fades away, ambient noise from the shadows as you tentatively venture further in. There really is little movement, music to play in the dark so as to feel every subtle shift in flow, undistracted from other influences. Ten minutes and two thirds through, you feel lost within the myriad paths that you have tripped along, the returning saxophone a calling back to the entrance now too far gone. The meditative nature aiding a creativity in your imagination, the background effects sparking stories from that arc. It is an awakening jolt when it ends.

2 - There's a jittery skittishness to the back and forth string scraping that forges the path of the second track, a sawing sound that on contrast to the first makes it difficult to relax. And while you're less likely to close your eyes and float away - as you'll be constantly watching over your shoulder - it does allow for a different experience, the jarring rhythm contrasted by delicate passing moments of synth or noise or bells.

3 - The most minimal of all. Slow movement buried beneath low lying clouds, muttered samples, breathy wind instruments of some description, far off space synths. This sends you deeper inwards than any.

Naturally this isn't for everyone. If in doubt, think Bohren und der Club of Gore or Bong Ra, shimmering atmospherics favoured over repetitive drones, ambiance over cacophony. And if in the right passive state of mind, it suggests, allows for and aids your interpretation and imagination to run further from the template given.