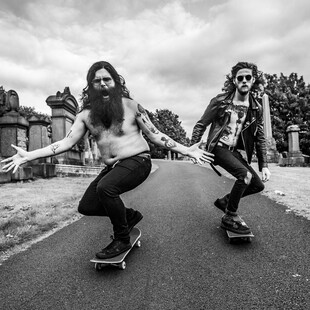 There are four tracks here, following relatively quickly on from their Why Not Every Night EP in February. The sharp turn around is instantly welcome as Get the Life revs into action. Slinky and lithe with a metallic rush brought on by the scent of leather and whiskey, this is headrush beer splashing punk, anthemic arousing music that The Dwarves would approve of.

The best song title I’ve heard in a long time follows with Kale Em All. This is fractionally less direct, but if anything more rewarding as a result, with an amazing garage stoner cool second half that is impossible not to warm to.

A darker tone of guitar slows things even further, a crunching weighty almost doom feel to begin 50,000 Nos Cans Can’t Be Wrong, before it strips back to mere drum and Scottish shouting monologue. It’s an unnerving place to be, like you’ve intruded on a drunk’s diatribe to no-one in particular, until you catch their eye at least.

Moving on quickly, the record slips back into the light and breezy rock ease, as if the last night of the last song never happened. The closing Life’s Alright is fantastic, punk and post-hardcore fun.

As I listen to Kale... for the seventh time since I started writing this this evening, with an uplifted mood and involuntary smile, you can only appreciate Acid Cannibals’ enthusiastic approach, and marvel as to its infectiousness.