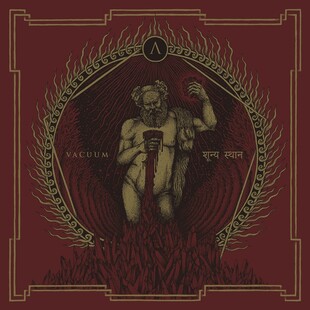 Entropia’s last was a phenomenal album of post metal, doom and atmospheric black metal majesty that was dumbfoundingly under appreciated. They return with Vacuum, with ambitions happily and boldly set higher.

You sense it before you press play, the Poles having committed to tracks of up to 15 minutes, such as the first, Poison, with its prog playfulness with demonic vocals agitating towards a more evil minded, violent expansion. It opens, a touch Mastodon in its progression, but through a psychedelic prism, a fidgety happiness contradicting the sense of the inevitable that it will all end in darkness.

There’s an almost Lightning Bolt experimentation, before blowing out, bellowing out, blasting out. It never peaks into undeniable greatness in this period as your patience hoped, but a template is established of a band exploring every dimension.

A decent start, but a noticeable pattern follows, whereby you are drawn into the grand planning of epic post-metal of different shades, only to find the investment of time and patience to go unrewarded with sufficient dividend.

It’s in evidence in the damp squib ending of the ten minute Wisdom, or the twinkly post-rock impotence of Hollow. The flashes of modern black metal of the closer somehow fail to rise that sufficiently either.

The thirteen minutes of the title track perhaps get closest to succeeding against the objective. The progression feels like it is winding tighter together, friction and energy entrapped, an explosion ready for release. Drum wizardry leads the increasingly spiralling patterns of guitar, the crashes of cymbal fireworks in the now developed winter sky of psych colours. Musically, in its expanse, this is wondrous, yet even here it never tingles the spine as I feel it should.

To be clear - this is an album of commendable vision; psychedelia and black metal and progressiveness drawn together by talented musicians with a desire to create something unique. Even the tracks negatively critiqued above are good. It is just a let down on what I’d hoped having fallen for their Ufonaut album, and more importantly, there’s a spark, a connection missing all too often.