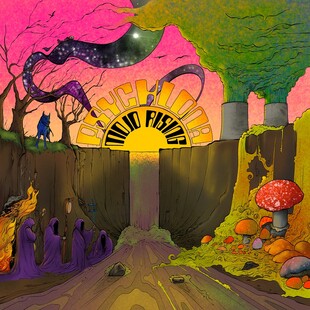 Like an old man that I practically now am, the wonders of the modern world continue to amaze. Even through the ninehertz inbox, whereby music reaches us from across the globe, it’s particularly amazing when I’m made aware of a British band from a label or PR from another side of the planet.

Following Ether via Ukraine and InTechnicolour via Australia, comes Psychlona from 40 miles up the M1 in Bradford, releasing through US stoner foster home Ripple Music. The obvious answer is possibly my wrinkled greying finger is no longer on the pulse, so at least this old writing hobby keeps my eye in.

It’s on Ripple, so you know the score, this is stoner rock of late 90s stock. First impressions are weird, because what is presumably meant to be a statement psych-daubed riff within Stone sounds instead very like Wherever I May Roam through a battered old tape deck.

From there comes stoner with all the usual flags. The vocals tread a familiar thin line between garage recording realism and as weakness, either way settling them in the middle of a large pack rather than standing out. The busy production hedges bets between gritty sound of the southern states and psych flourish, but suffers by not committing to either.

There are some common influence pointers - exemplified on Big River, where mid 90s Fu Manchu jam with early still-stoner Orange Goblin. It’d be great if you’d never heard the respective periods of either. When not completely on it, such an the nine minute closer, it grates easily.

Despite all this worn wariness, there are highs, Down in the Valley’s Nebula with a Yorkshire accent the first sign of a band with something close to a level of unique identity being an example. Juju tops the class, a danceable rhythm, big billowing bravado that tempers my cynicism, allowing me to enjoy myself.

As generic stoner rock goes, it’s not terrible. For some this will therefore excite, adding to the similarly minded British stoner scene built up, on the APF label in particular. But ultimately it is generic, hampered by its obvious alignment to and lack of divergence from a sound that peaked over twenty years ago.