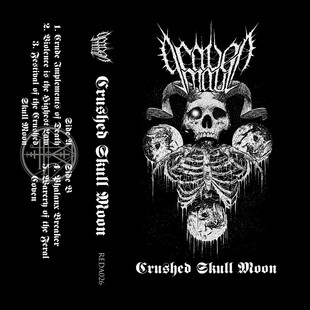 A death metal demo that looks and feel like the many thousands that came before it, Graven Maul's list of influences reads commonplace - Coffins, Incantation, Morbid Angel - but then throw in Minor Threat at the end, to offer an inkling of intrigue.

This blossoms further having submitted to the grip of the five tracks recorded. This is raging, from first blast until last, never dipping in enjoyment. The primitive minute clobbering opener stokes the fires, the brutal Violence is the Highest Law follows and flattens all in its path.

There is a definite Nails-end metallic hardcore influence at various passages, piling on the layers of oppression, Festival of the Crushed Skull Moon bringing Harm's Way testosterone to Entombed death, a Black Breath stench eminating from the following Phalanx Breaker.

Throw in occasional nods to ugliest sludge, another angle in extremity in the brilliant closer (Warcry of the Feral Coven), and you have a demo that'll keep you occupied for days to come, casting inappropriate shadow over the coming summer. Self-released digitally early in the year, this has been picked up for label cassette release and wider exposure - you can see why, because this is something special and rotten.