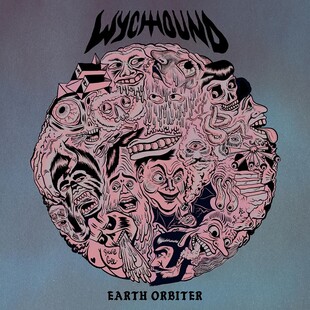 Wychhound are a "genre defying" instrumental four piece from London. After hearing Earth Orbiter through a few times now, I'm not sure which genre they're defying (maybe it's hip hop) because this is fairly pure stoner rock. And then there's a gripe running album long, which I may as well group together and mention now, so not to repeat in mention of every song... that they could do with, and I'm sorry for being a dick about this, vocals.

The album has been recorded live, with all the positives and pitfalls that brings with it evident - a true, warming fuzzed sound, with occasional lapses in clarity. Supercluster certainly loses some of the subtlety in the guitar work as a result, yet Flux, the opener, benefits from a nice raw roughness, rocking an air of cool, lead guitar going off on one like in days of old.

A seven and a half minute fulcrum track, Comet Shoemaker - Levy 9 (SL9), begins with Dozer style stoner drive, but just as you're wondering how they'll fill its allotment, there is a development into post-rock ambulation, much like Mothertrucker did with their instrumental sound. It's decent. The following Aurora is better still, less immediate, more thoughtful, a wistful mind on a hazy summer's day, it is the most interesting track and offers much needed variance, very good in fact. The closing track loses the momentum a little and brings in an inevitable Karma to Burn comparison just in time.

"It's good but..." summarises my thoughts of Earth Orbiter. There's some great moments that I feel could be elevated, and plying a well travelled sound within the genre they lack for individuality. That said, the longer the album goes on the more I found myself attaching to it, where as I thought I'd tire it gets stronger, and tracks like Aurora showcase a band with plenty of talent at their disposal.