Karma to Burn / Sons of Alpha Centauri The Definitive 7" Trilogy! 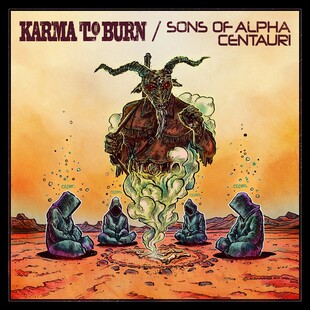 I'm not sure how aware our scene is to the splits between the stoner figureheads of Karma to Burn and the psychish Sons of Alpha Centauri, their releases tending to be restricted to somewhat obscure vinyl runs, but they've been going on for more than a decade now. They've all been packaged together here, helpfully and delightfully in multi-media and extras-enticing bulk, but frustratingly in its continued likelihood for minimal exposure due to a limited run. Best be quick.

There's effectively three bands to contend with here, the duo from the split and tracks of true collaboration. The latter, where Karma Will travelled here to the UK to jam with the Sons under the moniker of Alpha Cat, begin with The Flying Dutchman, where rock n roll vibes flow to playful guitar ending, the ever present harmonica bringing obvious reminders of Five Horse Johnson. It's good, but forgettable - better comes in the other two tracks, the inventive Last Day of Summer and the top of the crop, Fire. You can hear the blends of both inputs not contrasting but intertwining to a new whole...it grows, getting better as it goes. Not everything on the original vinyl splits is new material, so to hear something as rewarding and intriguing as this is invigorating.

Sons of Alpha Centauri's three tracks follow the Karma to Burn post-vocalist nomenclature standard of numbers. 65's maybe simple instrumental stoner, but is elevated by interesting sampling, while 71 shows that Karma to Burn have rubbed off on them in more than just naming convention - this is very Wild, Wonderful... Purgatory with its fast paced riff focus. Their best is on 66, similar again, with psychish twinges beneath a bold and pleasing riff.

Karma to Burn's three entries are all available in one way or another elsewhere. Fifty Five underwhelms a little; Six has always been amazing. Fourteen is an instrumental Patty Hearst's Closet Mantra... it reminds you, if needed, how utterly amazing their debut album was. It might make you pine for the full vocal track and go digging back into your CDs for that glorious release of the late 90s, like I'm about to, but whether or not you do it just brings warm memories... this originally came out a couple of years after I got into stoner rock for the first time, and to hear music so breathtaking, so absolutely vital, was to know that this was the most important sound in the world at the time, fuck the then uprising nu-metal, fuck their then label mates at Roadrunner releasing disappointing follow ups to era defining metal which we didn't know then but had already hit its peak - if stoner rock could power such beauty then I was to follow. As is well documented, things went differently for the band immediately after, and for that matter the genre further down the road, but that album still stands the test of time, one that you can judge people on whether they've included it in their top ten albums of all time or not.

Nothing sounds like that album, to this day twenty years on and this allows welcome reminiscence. It would be nice to hear new material, but that comes with their albums - this reinvention of those classics is welcome on this special release. Sons of Alpha Centauri hold up their end, and the collab gives it that much needed freshness. A special package to hunt out.