The Ditch and the Delta Hives in Decline 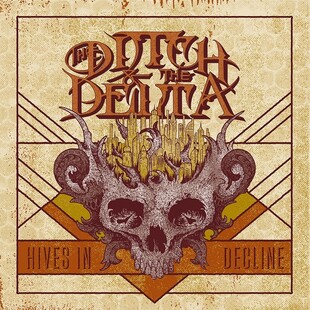 The recent demise of Kylesa was a lamentable moment beyond the loss of one great band, in that it arguably signalled the end of a an era, a full stop on a period and a sound where enlightened souls resided inbetween the blueprints of Neurosis, early Mastodon and doom, a progressive approach that did not feel the need to eschew a satisfying heaviness. The now exists a void, the lead pioneers now either 'progressed' beyond that original mold (Baroness, for example) or simply no longer with us.

If there is to be a revival, then judging by Hives in Decline Utah's The Ditch and The Delta will most likely be involved in the resurgence. From the off, with the opening title track, your mind is cast to a range of reference points, from Thou to Taint, via Neurosis and a major early/mid period Kylesa influence, all of which needless to say is a massive plus point. It is ever interesting, maintaining a forward propulsion and not trying to be overly clever. Fuck on Asphalt is spritely paced, further bringing in the early Baroness EPs or even Torche pointers.

The album is well constructed, a rounded experience, with three songs ether side of a interlude; no weak link track, and subtle variations between them, keeping your wits on alert. The highlight of the latter half is Mud, a delicacy in its construction that nods towards post-metal thinking, building an emotional charge that explodes out in post-sludge brilliance.

Hive in Decline is a very good record. It may not be up there with the masters of their influence mentioned above, but it definitely charts The Ditch and the Delta on a direct trajectory to the centre of the for-mentioned vacated plains, torch carriers to bring much needed new light on a dormant sound.