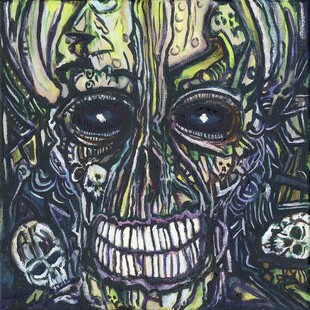 Coltsblood return, refreshed and ready for the attrition of war, doom hardened, battle equipped and riffs sharpened. This is a band with serious intent, a path of their own forged through both thick undergrowth and bleak plain, one beckoning, daring you to follow.

The title track opens, thirteen minutes of foreboding doom. The fade in slow entry intro develops so that the album and track title become a perfect encapsulation of the haunting, unnerving sensation generated. Slow and ponderous; then death doom vocals force through the blackness, before the pace quickens, a head-spinning surge to almost black metal realms, the sudden injection a disorientating and fearsome experience. It is epic and deeply immersive, the music alive with an unnatural electricity, suggestive towards nightmarish visions, of being lost in the woods at night say, of being hunted, of being in an unnamed and uncontrollable peril.

Mortal Wound pushes the swirling black metal outbursts from within lethargic funeral doom trudgery further, the threat of the storming eruptions never allowing you to settle. After the sombre funeral march of The Legend of Abhartach, the death churns of Ever Decreasing Circles follow, gathering round an unignorable doom riff repeated as a burn on your consciousness, with added gothic frays that nod to My Dying Bride et al. The closing The Final Winter's slow pace and guttural death vocals are offset by synth effects that note a change of atmosphere - is it light? hope? aspiration? redemption? Perhaps it's the settling of sorrows, battles won and the peace upon arrival at the gates of Valhalla.

Coltsblood's signature variance in their handling of time, motion and energy from within a typically sedated funeral doom base creates a tension unlike any of their peers, whereby the unpredictability is palpable, where even the murkiest, deprived corners within which time stands still, and riffs pass even slower, never allow you to relax. It's what marks Ascending the Shimmering Darkness as such an essential listen.