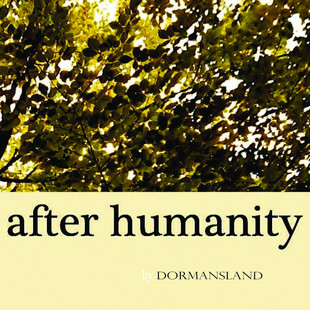 Ah the solo record. Is there anything more polarising? Did Jason Orange ever do a solo record after Take That split in the 90s? A quick Wikipedia reveals he did not.

That out of the way, James Parker, aka Dormansland has seen fit to create a somewhat chilled record sans band. What is here is a strange, but enveloping curio. The overarching feel here is a fog-like production that falls under several umbrellas, bringing to mind shoegaze, psyche and even a little black metal. His past in band like Hey Colossus, Tyre and Gorse show at points but these songs feel both more experimental and perhaps more personal.

James explains in the notes that accompany this record that the songs are inspired by global events. This is certainly reflected in the mournful and almost dejected vocals. Some of them sound like audible sighs and there's a sad hopelessness here you can hear under the brutal drum machine clicks and phuts. Some of the tunes also hang in a similar way to the greyness of Silver-era Jesu.

The styles shift about as James admits in his notes but it is to the record's credit. It sounds awkward and riled up. You can imagine blurred newsreel videos to tracks like The International. This track i particular is cloaked in samples and then a smooth, crackling riff rolls over the top like a digital cloud, making the whole track feel claustrophobic.

Bits of this record feel caustic and disjointed, but that's again an interesting feature. Some sounds decayed and pressed deep under compression and filters. As a result, some songs sound cramped and uncomfortable, which is perhaps the intended effect.

What comes across most of all is a sense of frustration with things as they stand and perhaps a lack of control we all face politically and every day. The tension is certainly there, witness the tapped pulse of New White King or the bleak beauty of Dead Land which ventures into droning nothingness at points.

The idea of humanity slipping somewhat into an irretrievable state seems to be the theme here. Bleak and unforgiving, After Humanity is part warning, part dejection. Only dabble if you feel able.