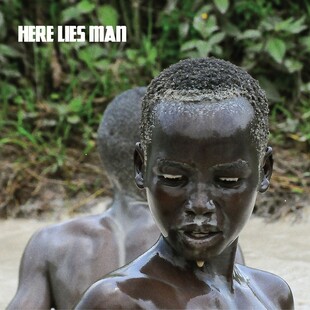 The striking photograph that adorns the cover and the less than usual origins of the band hints that Here Lies Man offer something rare. And so it proves. The concept of founder Marcos Garcia, Here Lies Man combine Afrobeat, of which Garcia is more than familiar from his membership of the band Antibalas, with a heavy psychedelia, recognising a symmetry in the reiteration of rhythms of the former and the riff-centred cycles of the latter. Naturally, this self-titled debut is intriguing if nothing else.

The design is layed out on opener When I Come To - eccentric noise, cycled riffs and repeating lyrics of the title name, a touch of jazz, of trip hop, mixing the slinky beats with a robotic riff in a way that feels weirdly natural, and impossible not to move along to. It's a mode replayed in slight variation album long, I Stand Alone and You Ain't Goin' Nowhere containing those same rhythms in makeup. It is all part of the plan, for as much of modern psych's aim is to have you zone out to worlds afar, Here Lies Man are here to get you dancing. Eyes of The Law's psychedelic fractals burst with colour and head nodding, hip shaking joy, while there's a definite funk element, prominent on tracks such as Letting Go.

The lyrical minimalism adds to the sense of revolving patterns, the turn of the kaleidoscope placed to your eye. Admittedly it begins to frustrate, wishing for some expansion, as this, and the song structures in general, become overly familiar and it meshes into one, distinction lost a touch. But this is a minor quibble, and you only hope that this is the start of Here Lies Man, a project with scope for development in myriad directions.

It's easy to get lost in the novelty to actually appreciate the music for what it is, or truly assess the longevity of its appeal. Yet Here Lies Man succeed in this regard (listen to the wonderous Belt of the Sun and try and deny it), the collusion of sounds fitting together surprisingly seamlessly, not shoehorned together, nor segregating the composite parts. This will offer respite, light and a energetic boost for many psych obsessives for a while to come, boldly standing out from the rest of your record collection.