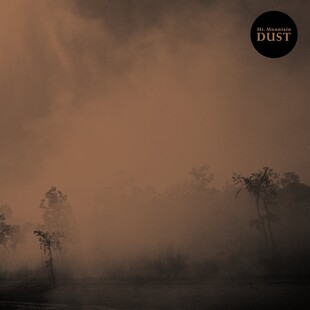 OMED, Mt. Montain's debut not only made an impression on me when it came out four or five years ago, it's an album I regularly return to to this day. Listening to the lush beauty of Divides can make me relax and smile no matter the situation. The Australians have been steady in their releases since, and now arrives Dust, due for release in April through the ever reliable Cardinal Fuzz, a promo received with joy.

Dust contains a mere four tracks but is considerable in scope. The opening title track is over seventeen minutes long, a psych masterstroke showpiece. A murmering hum with subtly increasing drum tempo and lonely slight guitar fills the minimalist void, the deftest of gentle droning noises for company. A flute enters, adding to the eerie atmosphere, a picture painted of a dawn in the vast wilderness of the Australian outback. Guitars finally burst from their restraint nine minutes in, vocals awaken at the twelve mark, this does little to raise the pulse beyond the meditative, until less than a couple of minutes from the end and the psych cloud becomes that bit heavier. A lot of modern psych is epic in length, as here, but the thematic tie in, the images conjured and transportation resulting is a true success.

The remainder of the album reinforces the mood and theme. There's the soothing gentle flow of Floating Eyes, a relaxed morning on a sunny day, full of optimism for the day ahead, but with no rush to do anything at all. Mt. Mountain do this psychedelia very well. The trance like state generated through Kokoti mimics the flickering heatwave sun haze of the horizon of the orange red endless plains, while the closing Outro leads to the end fittingly.

There's a lot of similar psych to this around nowadays, but this is more than mere rambling around the common tread psychedelic foothills. Mt. Mountain really draw you in, grander in outlook and tieing your imaginations to places dictated at the band's will. Dust is distinctive and transporting, a journey to embrace.