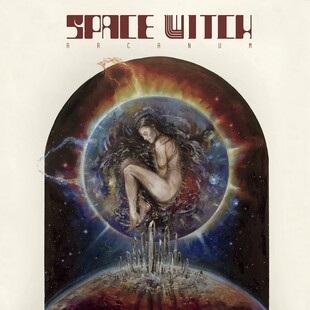 It is in the magical entanglement of spaced wizardry overlayed with a heavyset doom tone, akin to a fantasy amalgamation of Blown Out and Black Shape of Nexus say, that variation on the space rock template relatively unique, that enables Space Witch to stand out, opening up the astronomic mindset to doomed souls used to focusing on drugs, suffering and the occult Earth-grounded activities. It is why they are one of the most respected names from within the British scene, and the release of the epic Arcanum will only add to that reputation.

At nearly sixteen minutes long, it's no surprise Cosmonoid is slow to start, scene setting, not overloaded with psychedelic mind swirling effects, but their presence is noted, waiting in the wings but not the shadows, patiently biding their time. Five minutes in and the synth and noise effects rise alongside the introduction of a heavier, sledge hammering riff, both aspects simultaneously bidding for your attention within your mind's eye. It interlocks, weaves in and through and before you know it Space Witch's reason for being - to drag you in, pulling you inwards to their spiralling heavy psych to the extent that all distractions fade away and your other senses dull - has been achieved. Minutes pass in this state, before it breaks out again at right angles, the same combination of Hawkwind-synth and deep doom riffs leading you down another pathway, another space voyage route.

A feral guitar tone and riff greets Astro Genocide, with Oranssi Pazuzu-esque effects flying overhead, further marrying the contrasts of expansive outlook and bleak battery, as if trapped in a space vessel unable to override the self-destruct auto-pilot route towards the nearest sun. Four minutes in vocals appear for the first time, really taking you by surprise.

Hex opens with faint strains of jazz, as if a warm up heard from the street out of the local blues club, caves away to vocals sang with bombast, a giant bellowing to the gods from atop the clouds. It is an odd delivery, that almost hides the Slomatics style heavy, heavier, heaviest, repeat riff rumble beneath, the doom so dense as to blast away any accompaniment of synth, for the first few minutes at least. Battle Hag, much like the opener, plays with bursts of doomed energy against their cosmic backdrop. There is an almost proggy middle that eschews the doom for a while, ambling through the space clouds with an almost frivolity, losing the path a little but only following the imagined patterns within its own tripped out mind.

Space Witch have toyed around with this theme for some time now, successfully doomifying the phantasmagorical nature of the best of the space rock astronauts live and on record. But Arcanum is a step above, a culmination of their experience, their unique identity and their skill into a hugely enjoyable, bold statement of an album.