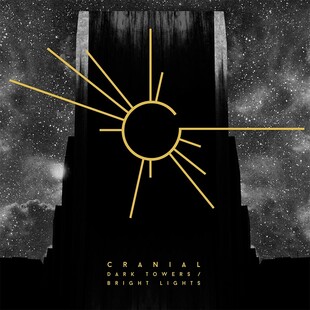 Germany's Cranial don't show any restraint on this, their debut album. Their ambitious approach and breadth of outlook can be witnessed across four tracks in forty five minutes, and in the sense of an underlying theme linking artwork, musical approach, effects and titles.

The album title is the accumulation of the four song names. Dark begins with a series of noises that could come from a sci-fi soundtrack, a motif continued at the beginning of each following track. This gives way to post-metal heaviness, a bit sludge too perhaps, not looking straight away for the quiet/loud crescendos, but the undulating riffs do drag you into their cycle. It does release in the middle section, no doubt to build to an explosive return, but when it inevitably does it is such a dense offensive it crushes any worries of it being formulaic.

It is very Amenra-esque, a comparison that exists album long. Towers is arguably the highlight, a thick doom sound with head-spinning post-metal structure. Shortly after the vocals enter five minutes in, guitar and effects combine, swirling around as if opening a vortex above. It morphs into simple heads-down sludge riff eight minutes through, at first appearing a tad basic but by the end you capitulate to the flagellation borne through its repetition.

By the time Bright arrives, I have to admit I'm getting distracted, a little bored. There's nothing wrong with the track, but you can start to notice the patterns, and without standout moments, or riffs, it doesn't hold up like Towers did before it. Lights is a little better, but the structure remains essentially the same.

This ultimately is an impressive debut, covering the heaviest and doomiest elements of post-metal with an underlying cinematic scope, pointing to a band with grand visions. That they don't fully realise, becoming a little predictable by the third ten minute+ track, is largely offset by, if nothing else, the sheer weight carried throughout, a creditable speaker shattering heaviness.