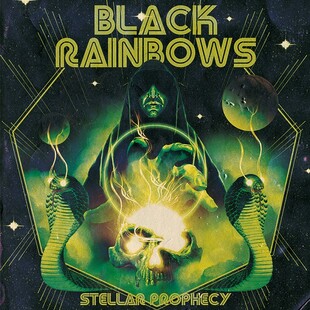 Black Rainbows have been around nearly as long as ninehertz has been online, and despite the vast turbulance and evolution within our scene in those eleven years, they've barely changed. While stoner rock may be on its last legs, Black Rainbows don't care, and with the vast experience behind them, and albums as strong as this, good on them.

It is a familiar sound - it was always going to be I suppose. Electrify kicks things off and you are immediately drawn back to the first Nebula EPs, resurrecting long forgotten pangs for Sun Creature or Let It Burn. Fifth track It's Time To Die is of the same lineage, unearthing early Fu Manchu fuzz lines along the way, and Evil Snake has a vague Truckfighters vibe. It would be easy to be cynical, by the book it may be, but it's performed passionately and as well as anything so purely 90's stoner in many a year.

On Woman they aim for a classy slice of 70's space rock, the nice effects from the subtly applied synth (part of a good production job all round) assisting, reminding me of Swedes We. It is a standout track, only let down by the naff overused title. And there are other variances, two long tracks in Golden Widow and The Travel, the former especially creating mellow, spacey surroundings, not trying to do much, content in it's tripped out, sofa-bound blissed out groove and astrological tranquility.

I first reviewed Black Rainbows in 2007, something I have only just re-read after the majority of this review was written. Aside from the recurrent We reference, it's interesting to remember how, for across the intervening decade, Black Rainbows have stuck to their guns even in the face of the deteriorating health of stoner rock, and reflect on how, with Stellar Prophecy they still come out on top, still creating great music.