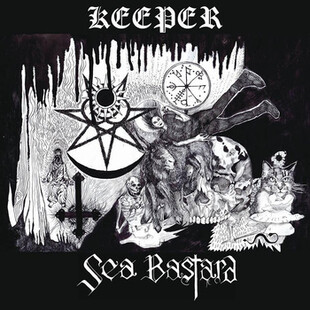 A friend of mine once coined the term 'takeaway doom', doom so slow you could order chicken bhuna between the thud of the bass drum and the powerful crack of the snare. That's not to say California's Keeper plough such slow speeds, but they certainly like to keep things hateful and bleak.

777 is a wretched, churning pit of a song. Taking up fifteen minutes of your life you are never getting back it has a flattening dull sensation to it. The vocals are screeched/screamed in a similarly disturbing way to Alan Dubin of Khanate, you know, like nails down a blackboard, or in this case claws down a slate dungeon wall.

The lyrics are a little too ridiculous to take seriously, all cod-desperation and anguish. I know that this guy probably had a sore throat the next day but his life is probably better than he's letting on here. I press my face to the cold, tiled floor/My fingers at the back of my throat.

Really? Someone has to use the bathroom after you champ. Still, it sounds good.

The UK's Sea Bastard take up their side of the release with the subtlety of a hammer to the fingers. Still verging on that 'takeaway doom' tip, their approach is much more metallic than Keeper's bleakness. Death grunts rather than screeching mean it's a downtuned affair, the rumbles of the guitars suiting the singers deep, burbling roar.

The glacial pace gives it a lethargic feel, like the whole band might forget to keep playing and just fall asleep standing up at points. Please know this is a good thing, too many doom bands want to race to the end these days, sometimes you need to revel in that horrid, thick as pea soup feedback before you crank into a quality riff again. Walls of sound are best built slowly, otherwise they fall down.

'Heavier than a ten-ton brontosaurus' comes to mind, but that's too reductive, this towers above all prehistoric metaphors.