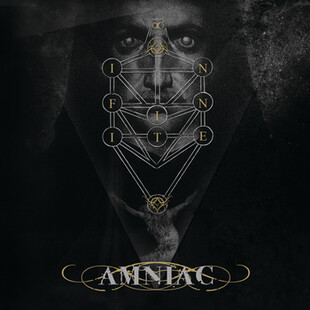 Democracy, philosophy, epic literature, science and the Olympic Games: Greece has offered an incalculable influence to all aspects of the modern world. Until now, however, post-metal has not been among the Greeks’ most significant gifts to Western civilisation.

Living in an Athenian suburb, Amniac could hardly be accused of lacking cultural influence but, the band cannot rely on the kind of grassroots metal scene and constant rotation of awesome touring acts enjoyed by some of its contemporaries from abroad. Viewed in that context, this is a pretty impressive debut full-length.

The band cites Neurosis and ISIS as influences and there are obvious traces of both bands in Amniac’s sound. Devotees of the post-metal genre will be familiar with brooding, mid-tempo riffs and caustic vocals, though; this is a formula which lead to a saturated scene seven or eight years ago with a seemingly unending conveyor belt of broadly similar acts converging upon a single sound. Trying to break out of the masses in 2007 was tough; is it worth pursuing in 2014?

The album opens with And the Others Just Survive. The song combines some delicate, harmonic picking with big riffs and impressively powerful vocals. It could be mistaken for Cult of Luna – and that’s no bad thing.

The album features a couple of short interlude tracks to add atmosphere and the whole record is cohesive, moving gently from the melodic to the heavy with reasonable dexterity. Track five, The Infinite, displays perhaps the most obvious Neurosis influence with very a Scott Kelly-esque vocal delivery defining the middle of the song. It’s actually quite powerful, but nobody can out-Neurosis Neurosis, can they? The Infinite descends into a close which bears the hallmarks of a more mainstream metal influence and even some 90s-style whispered lyrics.

This segues neatly into A System Waiting to Fail which launches immediately into a chunky, stompy riff that put me in mind of Swedish hardcore greats, Raised Fist. I certainly wasn’t expecting that and it’s a sound the band appears comfortable playing. Much of the rest of the album descends into a familiar, mid-tempo rhythm, perhaps lacking a little in variety with overly long songs.

If I’m sounding a little unenthused, it’s simply because I struggled to find anything genuinely ground-breaking from an album in a genre which itself has suffered from an abundance of bands and a dearth of much innovation. Infinite is not a bad album by any means, it just lacks any spark of greatness. There are no moments when a truly life-affirming riff appears, reaper-like, from behind the curtains to bludgeon you off the sofa. The sheer Brunelian might of Neurosis is absent and so too, sadly, is an ISIS-rivalling riff quota.

The record is certainly not without promise, though. The guys have a nice ear for melody, are technically proficient and with time to develop a more personal sound; album number two could be very exciting. For now, if you love Cult of Luna and Amen Ra, Infinite is a decent stab at that kind of sound from a band very much still finding its own musical personality.