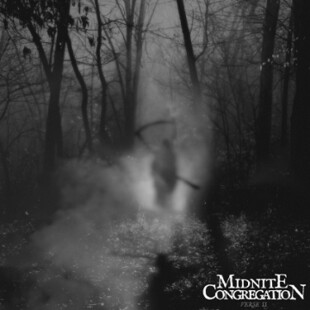 The main stars of this six-band release seem to be the illustrious Cough, but in a departure from our traditional prose, here's some abstract impressions of all the artists' contributions so they all feel included and worthy.

1) Shroud Eater's Monolith is a beer can in the air, probably one of many that night, while some trucker cap and denim bros sink as many as you. There's even a solo in there you can fully imagine is delivered with one foot on a monitor.

2) The Haunting Green sound like miserable goths with their mournful effort Blind Me, Night which moves at milk float speed towards a pit of despair. What sounds like men actually crying does little to lift these miserablists out of their fug, but you find yourself really not minding at all. Misery loves company as the old phrase goes, hopefully The Haunting Green have plenty of Facebook friends. (A quick check says they have 756)

3) Apart from a lack of vowels, INVDRS have much to offer with Into Your Grave. A sick and slack sludge approach means their singer sounds like Mike from EHG if he chewed tobacco onstage. He sounds grumpy, and the band are happy to back him up, sounding all staccato sludge (which should really be a sub genre of its own).

4) Dim by Ladybird rolls into proceedings like a tank, which is what Ladybirds are sometimes compared to in the natural world. Ploughing through greenfly and other insects and plants with a ferocious appetite, they really are the Panzer division of insects. This track sounds as if it was similarly recorded to maim and destroy, all aggressive percussion and distorted vocals. Ugly, ugly, ugly.

5) Trapped Within Burning Machinery have the most apt name to their sound as their vocalist appears to be screeching in pain, a high pitched bark that makes Tire Fire all the more deliciously dark.

6) Cough are rightly praised for their molasses-thick sound and Fuck Up is no different. Recorded around the time of their split with Windhand last year, it's a totemic, ritualistic slog through knee-deep effluent that needs to be boosted to deafening levels to fully appreciate. Evil as well as just groove-laden, it's a case here of saving the best until cliched last.