Hornss No Blood, No Sympathy 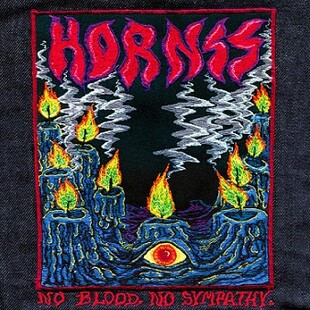 Hornss take me back, a grizzly mix of doom and stoner rock energised by punk grit, with a touch of the NWOBHM here and there, it is nice to hear an album of the old school stoner sound that is bold in it's intentions and unwavering in it's task.

Unfortunately No Blood, No Sympathy is patchy, frustratingly so. When it hits it's groove it is on it, grappling you into a bubble of enjoyment before bursting it with moments that pass you by that allow your attention to wander. Having said that, it's inconsistency keeps you hooked, always wondering whether the next track will pick you up again in it's whirlwind path.

The negatives are never terrible, just that they don't do enough. The last five songs for example all hold promise but never deliver, and even when they do several fade out just as you're getting to grips with them - like listening to an album through the itunes store promo snippets. The shortness of the tracks is generally a positive - with twelve tracks here it could afford to lose some weight to make it a more rounded and solid release, but the lesser moments never overstay.

To the positives then, of which there are a few but provide real highs, and should be the focus here. The mix of 90's stoner and 80's doom sit perfectly together when they get it right. Maker of the Moons holds a nice doom riff, slouching slothfully towards the gigantic Dragnoaut of Sleep with the influence of the Wino bands, while elsewhere the punk speed and spirit provides a nice contrast to the slow of the doomier moments. There are two great tracks here, the pleasantly titled Ejaculation of Serpents providing a mellow, positively stoner rock groove, aided by gentle female vocals, it has a kindly assurance of touch. My personal favourite though is the opening The Red Death which starts the album at full speed, combining the throttle of Orange Goblin to the vocal delivery of Big Business - it is admirably reminiscent of the latter's Here Come the Waterworks masterpiece.

So, in summary, it appears to be a bit of hit and miss, but I'd prefer to remain on the positive side. The three piece have pedigree, having been involved in the Palm Springs desert sound way back when, and this is at times thrilling, the band always coming across as enjoying their craft. While there are negatives, as said earlier they're never overly damaging and the positives prove No Blood, No Sympathy to be a ride worth taking.

Forums - Reviews and Articles - Hornss - No Blood, No Sympathy