The Socks The Socks 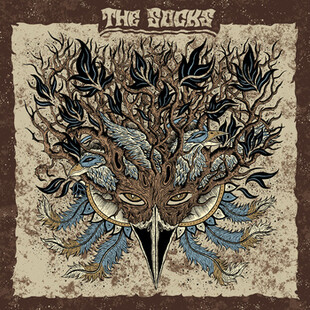 The Socks' debut release for the mighty Small Stone label has been keenly anticipated for several months now. The band, from Lyon, have made considerable waves with their two EPs to date, hinting at a rise towards becoming the latest powerhouse of the European retro-doom scene, and as such the most exciting release due from the label in years.

The Socks practice a stoner rock sound meeting with that classic heavy rock and doom rhythym that has risen to prominence over the last five years. They do it superbly well too, and the album is testament to that. There is a lingering issue with this self titled release though, one which I'll address early, and that is it's familiarity with the leaders of the retro wave, Graveyard. My initial run through of the album, the one where you don't necessarily take everything in but gain first impressions on a general feel, recalled the Swedes on numerous occasions. Second track Some Kind of Sorcery is straight up Hisingen Blues worship, and it is evident elsewhere. It is good, great in fact, there is no doubt, but when it's so closely aligned it is impossible not to notice, nor to draw attention to it within review.

Further run throughs are kinder in this regard, as The Socks' own identity reveals itself, giving it more credibility. There is some cracking music here, a rewarding experience. New Kings is brilliant, and the organ on Lord of Illusion raises the bar, the track ending in boisterous fashion just when you think it's heading down a cul de sac. We Live creates a raw, bassy Black Sabbath picture, complete with Ozzy-esque vocals. While the micro-genre is filling fast, this is the most satisfying output of the calendar year to date, easily eclipsing The Vintage Caravan's much touted Voyage.

The album as a whole is very strong, an excellent release that for all my curmudgeonliness about mimicry will get more plays on my stereo this year than most offbeat oddball originators I come across. The Socks' proximity to other acts can't be denied, and it is a negative mark against them, but that said, if Kadavar, Mountain Witch and, yes, Graveyard et al have burned your incense sticks over the last few years, then The Socks is pretty much essential.