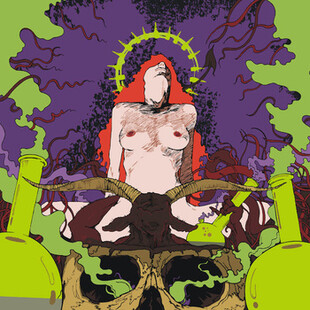 In a heaving inbox of reviews, the rather clunky name Bitchcraft understandably stood out. I held a faint guilty hope that it would turn out to be an all female Witchcraft covers band, but sadly it was not to be. That niche is still out there to be explored. Bitchcraft are Polish doomsters, offering four tracks across more than half an hour.

The sound is familiar, the well trodden dual influence input of Electric Wizard and Black Sabbath equating to doomy, fuzzy occult rock. The basic production shrouds every note in dense blackness, adding to the nefarious framework in places - the swirling opening of Acid Dream is head swimingly enclosing as a result - but grating at points, with an infrequent annoying buzzing where surely there shouldn't be.

The sound is defined further by female vocals, linking in to the likes of Ides of Gemini or Blood Ceremony, authorising an air of grandiosity from out of the fuzzed mire. It's occasionally spellbinding, such as throughout the lead off track Not the One, although at times you want them to kick on, off and out into more ostentatious riff driven highlights, the way 'Wizard can turn from lethargy to explosive so brilliantly.

Hardly original, buried beneath layers of feedback, but overall a fair bit of fun. Fans of Jex Thoth, Windhand and Bloody Hammers would do well heading the way of Bitchcraft.