Tomorow We Sail For Those Who Caught the Sun in Flight 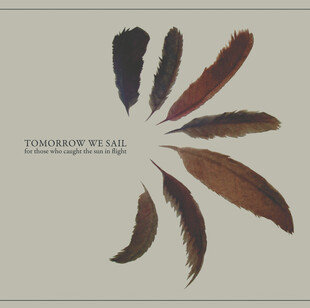 For those not familiar with Gizeh Records, they deal with the warm, drawn out and vast. In the past their records can be summed up by their bleak, abstract covers, with often melancholic and contemplative material within.

With Tomorrow We Sail, they have pushed towards us a rich, velvety album full of slow-burning majesty. Seven Leeds musicians make up this band, together since 2009. The sound starts off quietly enough, but even during the opening track The Well & The Tide it swells to a euphoric and uplifting whole very quickly. A wash of strings, percussion and multiple voices exploring different fronds on a nautical theme come together to create a wholly absorbing and frankly mind-blowing total.

The main voice here is a rich, crackling male one, but to pick him out above others is unfair. Sweet female vocals drift along and other male voices chime in to create a tapestry. However it's all with interwoven lines, rather than all from the same hymn sheet. There are patches of bleak, string backed solos, but for the most part there's a dense, yet delicate shimmering underneath that makes it beautiful.

The press kit compares them with Low and Talk Talk, but there's a much more folk-driven sound here under the surface, giving them a sound that is truly their own.

Choral influences are in evidence on Never Goodbye, which climaxes with ghostly and affecting vocal patterns.

The post rock element is always there though, no bad thing, it makes its mark subtly. There's no quiet to loud laziness when it comes to dynamics, rather an undulating presence of picked and reverb-drenched guitar that only rages when it needs to like on the storm-like December which erupts with a heavy, string-fed loudness that's invigorating.

Elsewhere, a call and response vocal setup means the poignant White Rose sticks with you. In contrast, the closing For Rosa is a darker proposition, all brooding lament and undulating strings going wild.

It's a dense and demanding listen, but Tomorrow We Sail are a band worth getting to know.