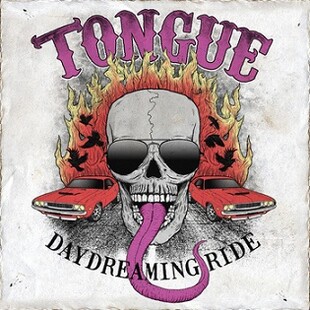 Tongue originate from Belgrade in Serbia, and this is their third EP of a trilogy, the previous instalments having being reviewed here and here already on ninehertz.

Daydreaming Ride is a gratifying quarter of an hour or so, simmering from an alternative rock grounding, it appears to be influenced by many American bands from the mid 90's, yet succeeds in sounding alive and for it's time. Devil's Echo (It's Alright) has stoner tints, but sports a green mohawk, the heavy rock definitely infected by punk spirit - it has a Rocket from the Crypt vibe running through it's first half, although that maybe subconsciously impressed upon me after hearing On a Rope on the radio earlier this week.

A more pertinent comparison would be with El Thule, the Italians who mixed Pennywise punk with stoner riffs thrillingly on their debut No Guts, No Glory. Mix that with the big rock of Grifter say and it's vaguely in Tongue's neighbourhood. Sketching and Drawing even draws from Jimmy Eat World pop rock sensibilities.

The title track closes the EP and is grander than it's predecessors, a bit of a grunge epic, a little bit Foo Fighters in their more contemplative moments. It's either an affable alternative and mature offering, or a bit of a generic let down, I can't make up my mind.

Either way, another agreeable release to devour (it's offered for free download on the bandcamp link below), with accomplished vocals and musicianship aided by a bright palette of influences.