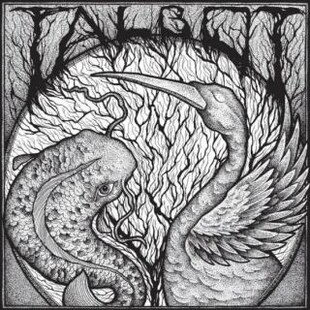 Estonia's Talbot (not named after the type of van) have been damaging ears since 2008. My introduction to them was news of a show in Sheffield which eventually got cancelled due to their previous drummer's tattooing career taking off.

With new drummer Jarmo on board, they've eked out Scaled as album number two in an earth-shattering way. It's as trippy and psyche-driven as it is loud and punishing. With a two-piece you can often seem limited by simple logistics. Talbot are different, their guitar sound is quite terrifying, equal parts sloppy bass and intense crunch, it more than stands up to deliberation.

With both members taking vocal duties too, you are given enough variety for it not to seem repetitive either. Opening track Spectral Express is a writhing fucking eel of a song. Chuggery collides with Jarmo seemingly trying to put his drum kit through the floor. There's two ways of playing the drums it seems, tickle proficiently as if coaxing a musical formation out of it in a jazz style, or just beat it like it's an animal you want to eat for dinner with a particularly thick skull. I'm listening to this through headphones and it's too loud even at half volume. If I put this through my wood-effect stereo speakers, they may turn into firewood or worse within a few minutes of this.

Comparisons are hard to make, but imagine bomb-string era Torche colliding with perhaps the ichor of Taint or the prog-infused mysticism of Yob and you're getting somewhere close.

Those vocals are perhaps best shown in tag team mode as in EgoMine where you get the clean, tangible and clear rasp followed by the death-grunt style which lends it a bad/even worse duality of character.

Apparently back next year on a European tour, my best advice is taking earplugs. It seems stupid to be recommending something most people do as standard, but from the sound of Scaled you will need them on pain of deafness.