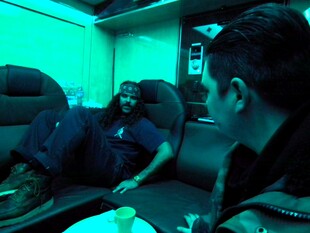 As many fans of thunderous stoner rock know, the engine that has powered the majority of the landmark albums has been Brant Bjork; his unique style of Bonham-influenced drumming has been a powerhouse over the past twenty years.

Not only has his drumming been a force within the genre but his solo material is proving itself to be some of the most creative and experimental desert-fused rock to date.

I caught up with Brant in Manchester on a wet Wednesday night on the back of the bus prior to his new band Vista Chino’s set at the Ritz.

9hz: How has the tour been so far?

Brant: Good, yeah, this is our first date in the UK; we’ve done maybe 8 or 9 shows in Europe, Scandinavia. We’ve had a great response so far.

9hz: Who are your influences as a guitar player? 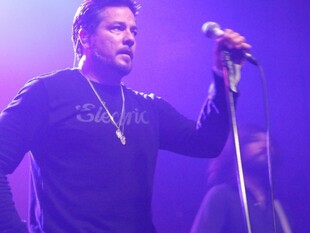 9hz: What about as a drummer?

Brant: As a drummer, Ginger Baker, Bill Ward and I like a lot of the old jazz guys too, Elvin Jones, Gene Krupa, John Bonham...I’m into the classics.

9hz: In the early days of Kyuss, did you expect such a positive response from the early records or was it just something that you were doing for yourselves and you didn’t really care for what people thought?

Brant: Yeah, well, expectations seem to be the theme of the day for me and back then, you know, we didn’t expect anything to ever come of it. We never thought we would be making records or any of that stuff, I think our lack of expectations is what allowed us to be super creative. When we were making those particular Kyuss records, what we wanted to do was fulfil ourselves as creative people, speaking for myself as an artist; I just wanted to create something for myself man.

It’s kind of like an adventure, there’s something that doesn’t exist and I would like for it to exist. Whether or not people are as excited as I am that it exists wasn’t really the motivating factor that I needed to create it.

9hz: Did the opportunity ever arise for you to be part of Queens of the Stone Age?

Brant: In the very beginning, Josh talked to me about it and we jammed a little bit on some of that first material, in the end I just wasn’t super comfortable with the situation. In the end Scott Hill from Fu Manchu called me up and asked me to join them so I kind of was more excited about that.

9hz: Aside from the media’s coverage of this whole ‘Kyuss Lives!’ dispute over rights and naming issues, have you maintained contact with Josh Homme? Is it still cool between you guys or is what we’ve all heard correct?

Brant: Well, it goes back to that word expectation, I think Josh has a certain expectation of what he expects people to provide him with in relationship within a band or outside a band and you know to some degree I might have that as well.

We just don’t fulfil each other’s expectations and that’s okay, he’s not the dude I care to hang out with or associate or work with and it’s probably the same for him. We had a very short relationship and for better or worse we spawned some interesting music while we were relating to one another.

You got to remember we were young kids back then, we were living in a small town, I wanted to start a band, and there were only three dudes in my whole town, only one of them had a guitar! So there wasn’t a whole lot to choose from, so the fact that Josh and I could agree on that punk rock was the music for us, we formed a relationship and I’m very grateful and proud to experience what I did with him.

But then as fast as we put that together, we evolved as people, boys to men if you will and as a man I just don’t recognise him anymore.

9hz: How do you approach the Vista Chino writing process is it like a jam room ethic or do you have set ideas that are already in place?

Brant: Well, the element with Vista Chino that’s much different than what it was when we were younger with Kyuss is that we’re grown and we all live in different places. So the proximity is a major factor.

Bruno (Fevery) is my writing partner for our new album, Peace. We’ll see what develops with the new material but with Peace I had to develop a writing and creative partnership with Bruno, John and I worked together but John doesn’t write from an instrument, he just comes up with lyrics and melodies to go over the top.

With Bruno, I knew from day one that I was going to have to develop a nice chemistry of drum and guitar. So we did a lot of homework, we worked on stuff at home and we worked on some stuff whilst we were touring with Kyuss Lives! and when it was time to begin the creative process, we just came out to the desert.

I built this studio while we were jamming and we just started throwing shit against the wall, we touched upon something that made us feel good and we started rolling tape man. 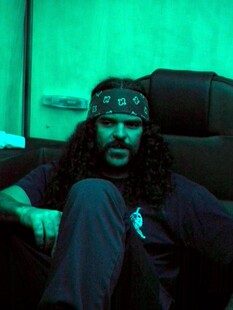 9hz: Are there any bands at the moment that you feel are worth mentioning that you’ve heard?

Brant: I just heard this band the other night called Uncle Acid and the Deadbeats, they’re really good, and I like them. They don’t cut any corners, they are completely dedicated to what their trip is and I think that’s really cool.

I also really like the first record that was released by a band, the all black band from Detroit called Death, you heard of this?

9hz: Yeah, I think I've heard of them, weren’t they dropped because of their name?

Brant: That's them, they were three black dudes from Detroit in the early 70’s that had band called Death they did a couple of records that never got released due to the name. It’s finally surfaced and that stuff is fuckin’ top notch; that shits really heavy.

9hz: A lot of your solo stuff has a different approach than other projects that you’ve been part of; do you prefer being part of a band or working solo?

Brant: Well, they both fulfil something in me, I enjoy team effort and I like being part of a band, that’s what I was kind of born into, you know, being in a band. Punk rock, let’s start a band! But, that side of it is really rewarding, you know the give and take.

In a solo situation, I’m free to just responsibility as an individual to just search and find then take whatever comes.

There’s a tremendous amount of freedom in that. There’s a lot of responsibility as there’s no one to slap around but you know if the shit hits the fan, everyone is looking at you.

9hz: How did the Fu Manchu connection come about?

Brant: It’s kind of a long story but I’ll keep it short, I had a friend in high school who was from, even though we were in the desert, had a split family and her brother lived in the beach and her brother was in a band and had a party one weekend, so we drove from the desert to the beach and hung out there for the weekend and I met her brother and we shared some interesting music and stuff.

He said that he knew a guy that was coming the next night and that I should meet as we’d get along and that was Rueben Romano.

That was when I was 17 and me and Rueben hit it off and he was like ‘I’m in a band and we should gig’ he was in Fu Manchu and I was in Kyuss. Then we would play in the desert and we’d play in L.A. with them on the same bill. Then I met Scott and that’s pretty much how it happened.

9hz: What equipment are you using drum-wise these days?

Brant: Well, I used Ludwig drums for many years but you know, I travel these days and I need a company that is solid and consistent and I was getting better results with Pearl drums, I signed a deal with Pearl so I’m with them for two years. I’m really enjoying their stuff. I use Paiste cymbals too so that’s about it. I change stuff around quite a bit so I don’t know what I’ll end up using!

9hz: What guitar gear do you use?

Brant: I enjoy lots of different things, I have some old Marshall’s that I like to play, early-70’s heads, it really depends on what music I’m playing really, if I’m playing something that’s a little more on top and funky, I’ll use Fender amps, I like Fender Stratocasters too I have some nice old S.G’s too. I prefer Stratocasters as I can get a much more percussive feel from them.

9hz: Do you find Stratocasters are more user-friendly?

Brant: I guess everyone has their own definition of what user-friendly is, I like to work hard to get something to perform, and I like that aspect to it. If it plays itself really well then I have a tendency to get despondent. Like Gibson Les Paul’s play so well,

I just can’t seem to get along with them. I like to bang on shit.

9hz: How do you feel about the wave of bands that formed in the wake of Kyuss?

Brant: Yeah, well I think, I have to assume that what I have experienced that Kyuss did this thing and when you start a thing, each generation kind of takes from it, pulls from it and kind of responds to it and builds on it. That thing ends up evolving or devolving depending on your opinion.

I grew up on hardcore punk and there was a time when punk was like Black Flag, DOA, The Circle Jerks and shit like that, whereas now you go ask a fuckin’ 13 or 14 year old what they think the hottest punk rock is and I guarantee it won’t be that, there may be some parallels but it certainly won’t be punk rock.

What stoner rock is today, I don’t know. I’d assume a lot of it is maybe a more commercial style? I don’t know, but then I hear a band like that Uncle Acid and it’s like, wow. I really like that they are all about their own trip, you can hear it in the production of their records.

Kyuss to me, we were just like, I guess we weren’t commercially motivated, or at least I wasn’t. Stoner rock to me is just hard rock that isn’t commercial at all and I guess, I’m not saying commercial music is bad, it’s just not the spirit that we had, where that spirit is today, I don’t know. 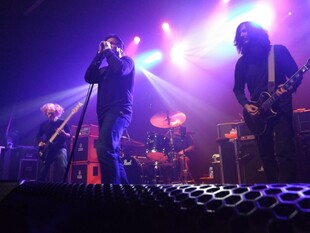 9hz: When is your new record coming out?

Brant: Oh, I have a couple of records that are on the shelf, one is an instrumental record that is kind of more jazz-funk based. I don’t know, sometimes I get in the studio and I kind of get like inspired to do something that I didn’t necessarily go in there to do.

It’s kind of weird man, I just made this record, it’s cool, I don’t know when I’m going to release it, I want to release it soon but then I’ve been saying that for three years! Hopefully, early next year I’ll release it. I’m just really enjoying the Vista Chino situation. I am getting itchy as a solo artist though.